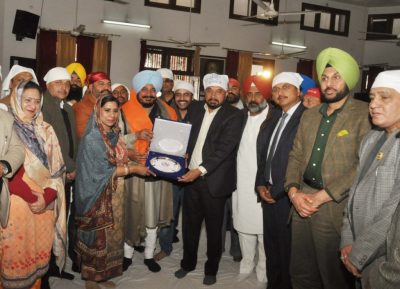 Jalandhar, February 9,2020: Asserting that the Indian constitution drafted by Bharat Ratna Dr. BR Ambedkar was in unison with the philosophy and teachings of Sri Guru Ravidass ji Maharaj, the Social Justice Minister Punjab Sadhu Singh Dharmsot today called upon people to join hands for protection of the constitution as a real and befitting tribute to great Guru ji.

Presiding over a state level function to mark the parkash utsav of Sri Guru Ravidass ji Maharaj here today at Sri Guru Ravidass Bhawan, the Minister said that some fissiparous forces were hell bent upon destroying the basic spirit of the Indian constitution, which needs to be checked by one and all especially by the followers of the great Guru ji. He said that Sri Guru Ravidass ji Maharaj had preached the ideology of egalitarian society which was duly incorporated by Baba Sahib Ambedkar in the constitution for safeguarding the interests of weaker sections of society. Mr. Dharmsot said that it was bounden duty of all the followers of the great Guru ji to safeguard the constitution and to protect the rights enshrined in the constitution for the weaker and the underprivileged sections of society.

Reiterating the firm commitment of the Punjab government led by Chief Minister Captain Amarinder Singh to secure the interests of the weaker sections of society, the Minister said that several path breaking initiatives have already been taken by the state government in this regard. He said that no stone was being left unturned for the well being the needy and underprivileged sections of the society. Mr. Dharmsot said that Chief Minister Captain Amarinder Singh was fully concerned for this noble cause.

The Minister further said that due to the stupendous efforts of the state government, the Union government has released funds worth Rs 600 crore for the post-matric scholarship scheme. He said that these funds were pending for the period of 2014-17 but now the state government has disbursed this amount to the colleges and sent the Utilization Certificate (UC) to the center. Dharmsot assailed the Union government led By BJP for backtracking from implementing this pro-poor welfare scheme initiated by the former Prime Minister Dr. Manmohan Singh. However, he categorically said that Punjab government led by Captain Amarinder Singh would not allow this to happen and this scheme would be implemented fully for the welfare of Schedule Caste (SC) students.

Earlier addressing the gathering MLAs Pargat Singh, Sushil Kumar Rinku, Chaudhary Surinder Singh and Rajinder Beri welcomed the Minister to the city. They unequivocally lauded the Chief Minister Captain Amarinder Singh for organizing this state level function at Jalandhar. They said that along with the overall development of the state, the Punjab government was also committed for ensuring the well being of the poor and needy people in the state.

On the occasion, the MLAs accompanied by Deputy Commissioner Varinder Kumar Sharma and Commissioner of Police Gurpreet Singh Bhullar present a momento to the Chief guest along with a  shawl and siropa (Robe of Honor).

The Minister also announced a grant of Rs 10 lakh from his discretionary fund for the Sri Guru Ravidass Bhawan.

Police bust looters’ gang in Ferozepur, arrest 4 accused
SECRETARY RTA ANNOUNCES TO LAUNCH A SUSTAINED CAMPAIGN IN THIS REGARD
Comment