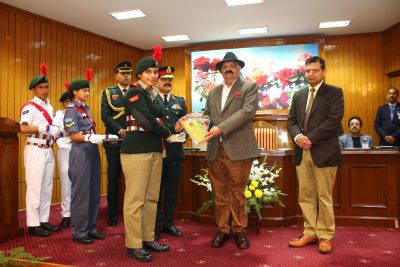 CHANDIGARH, FEBRUARY 6,2020 ( By YS.Rana) : V.P. Singh Badnore, Administrator UT Chandigarh called upon NCC cadets to devote at least two hours a week for swachhata while he was speaking on the occasion of felicitation NCC cadets on winning maximum medals at the Republic Day function. The NCC cadets of Punjab and Chandigarh, were honoured by the Governor of Punjab  V. P. Singh Badnore at an impressive function held in the Punjab Raj Bhawan here today.

Congratulating the young cadets on their spectacular performance at the Republic Day Parade 2020, Mr Badnore said that they have made the Nation proud by their splendid performance.

He also said the NCC has made an immense contribution towards nation-building and social harmony. It has transformed the lives of millions of youth by sharpening their leadership skills and inculcating in them the core values of patriotism, discipline, selfless service and confidence, said Mr. Badnore. The Governor also said that NCC should be introduced in many other schools of the state and also in Chandigarh so as to involve more students in the NCC activities.

Interacting with the vibrant young brigade, the Governor said the NCC cadets today had brought back memories of his own young days as an NCC cadet. The governor recalled when he, as a part of NCC Naval Wing, travelled within Rajasthan and other states especially to Goa to participate in NCC activities. He also shared how he had always wished but missed being a part of the National level camp especially in the Republic Day Parade at Rajpath.

He exhorted the NCC cadets and NSS volunteers to utilize the opportunities coming on their way with firm resolve and commitment, and contribute positively towards the growth of the nation.

He further expressed contentment over the inclusive role played by the NCC in empowering the youth to take up the challenges of eliminating all forms of social discrimination and exploitation, and work towards national harmony.

41.35 lakh tonnes of wheat procured in Haryana during April 1 to 16

HAFED sets a record of sale in a day