Home » Delhi’s testing capacity is 5 times that of the national average: Satyendar Jain

New Delhi, 17 March: Minister of Health and Family Welfare, Satyendar Jain today undertook a press conference to update the daily Delhi Health Bulletin in which he addressed COVID-19 updates, the positivity rate of Delhi concerning other states as well as the proposed Government of National Capital Territory of Delhi (GNCTD) Bill, 2021. He said that Delhi’s positivity rate was 0.6% which was the lowest compared to states like Maharashtra, Gujarat, Kerala, Punjab, M.P and Haryana. The Minister also said that Delhi’s testing capacity is 5 times that of the national average and that the Delhi government was very careful and aware. Delhi is well within the safe arena. He reinforced that everyone should continue to wear a mask and follow proper social distancing. Commenting on the proposed Government of National Capital Territory of Delhi (GNCTD) Bill, 2021, the Minister said that it was a tactic to delay the developmental work in the Capital. In a healthy democracy, healthy competition should be there. If the BJP government wants to compete, then they must do so in terms of work. After 73 years of independence, the central government wants to bring back the Viceroy culture of the British to Delhi. 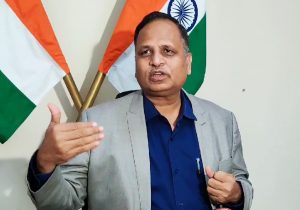 Talking about the meeting that was conducted by the Prime Minister of India, Jain said, ”The testing capacity in Delhi has been increased to 80,000 per day, which is the highest in the country. We are testing at a capacity that is 5 times that of the national average which is why we can identify and effectively treat the active cases.”

Talking about the monitoring of the people for the Coronavirus, Jain said, ”We are effectively monitoring people that are coming to Delhi from various states. Strict instructions have been issued to adhere to corona protocols. Ahead of the festive season, people get relaxed, and it is my humble request to all to not defy the precautions to be taken. It is our humble appeal to all Delhiites to maintain social distancing.

After the High Court’s verdict, all the files used to go to the LG. The file of Mohalla Clinic stood pending with LG for about one and a half year. Similarly, the files of CCTV cameras and wi-fi stood pending for a long time. I, along with Delhi’s Chief Minister Arvind Kejriwal Ji, Dy. Chief Minister Manish Sisodia Ji and Gopal Rai Ji protested at the LG’s house. I and Manish Ji even went on a hunger strike for about 11 days to get these files cleared. This is a tactic to delay the developmental work in the Capital. I say that we will continue to work for the welfare of the people of Delhi, come what may.”

Satyendar Jain also said, “In a healthy democracy, healthy competition should be there. If you want to compete with us then work better than us. If we have made 200 units of electricity free in Delhi, then you make 400 units free in BJP-ruled states. If you want to serve then do better than us. We are making people aware of the latest move by the Central Government. A lot of media channels are showing a survey in which 90% of people want an elected government in Delhi. This is the 73rd year of independence. We have got independence from British rule after a long struggle. Even in those times, the elected government used to report to the Viceroy. The same thing BJP wants to bring in the 73rd year of independence which is unacceptable.”