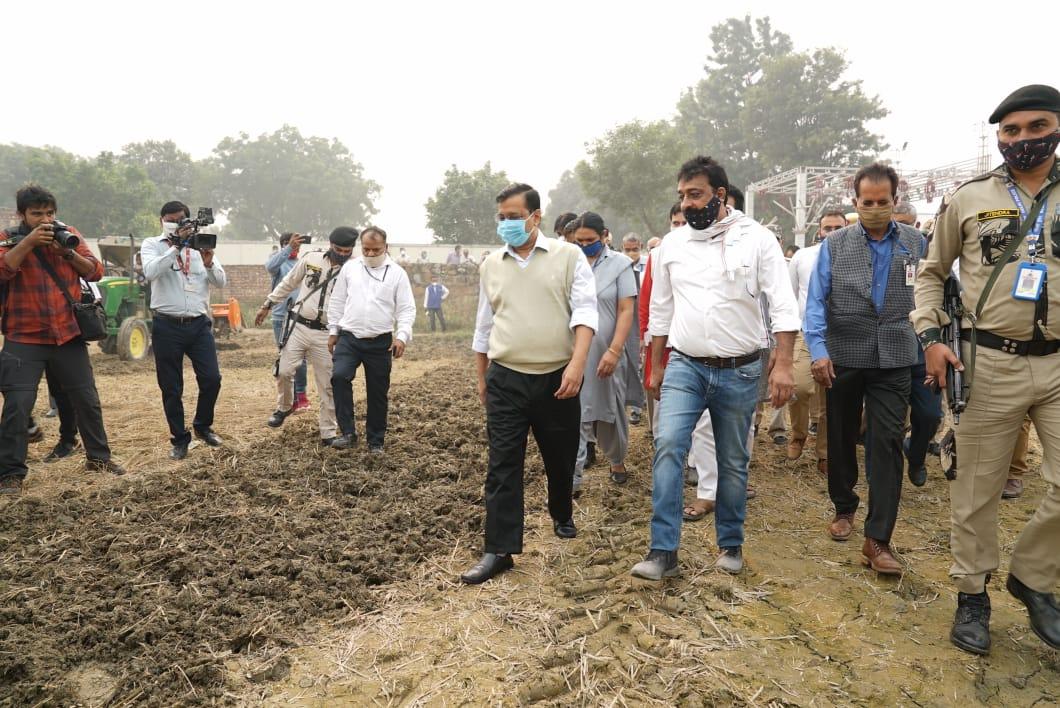 *Delhi has provided a cheap and effective alternative to stubble burning, the bio-decomposer technique of converting stubble into manure has proved to be a success: CM Arvind Kejriwal
New Delhi November 4, 2020: Chief Minister Arvind Kejriwal on Wednesday visited the Hiranki Village in the Narela constituency, to inspect the efficacy of the bio-decomposing solution developed under the guidance of the PUSA Institute and sprayed by the Delhi government on the farmlands across the national capital. He said that the bio-decomposing process of converting stubble into manure is a success, which shows that Delhi has provided a cheap and effective alternative for stubble burning to other states. He said that the neighboring states, where the practice of stubble burning is prevalent, should implement the alternative without any excuses. He also said that the farmers are highly distressed due to the absence of alternatives to stubble burning, due to which they are left with no option but to burn stubble and bear the brunt of pollution.
Addressing the media after the visit, Arvind Kejriwal said, “Every year, the smoke from stubble burning pollutes Delhi. The media reports and satellite images show that the practice of stubble burning is quite prevalent in the neighboring states of Delhi, especially Punjab. On one hand, the farmers are themselves very troubled because their families and the villages have to bear the brunt of pollution. The neighboring state governments have done nothing to provide relief to the farmers, because of which the farmers are forced to burn stubble which leads to major pollution across Northern India. To provide an alternative to stubble burning, the Delhi government has taken a crucial step in association with the PUSA Institute. We had sprayed the bio-decomposer solution on the farmlands across Delhi around October 13, which was developed by the Delhi government under the guidance of the PUSA Institute. Today is November 4, the entire stubble has converted into manure and the fields are ready for sowing again. Delhi, along with the PUSA Institute, has given a cheap and effective alternative to stubble burning. I hope that this is the last year when we have to suffer from pollution. No government can make any excuse, they should stop agonizing their farmers. I have spoken to several farmers in Punjab and Haryana, and I know that they do not want to burn stubble anymore. We would present this alternative in front of the Supreme Court owing to the effectiveness of this alternative. The farmers and the scientists of the PUSA Institute are very satisfied with the output of the solution. No government can make an excuse that they have no alternative or solution to the problem of stubble burning, because a very cheap alternative is available. We have sprayed the solution across Delhi in just Rs. 20 lakhs.”
Arvind Kejriwal said, “I have been trying to meet the Union Environment Minister for a long time now. Around 15 days before starting the bio-decomposing process in Delhi, I wrote to the Union Environment Minister and sought an appointment to meet him to discuss the alternative. He must have been busy, and so I talked to him on the phone. I told him that we might be late in providing this alternative to the farmers, the Centre must try and stop stubble burning as much as they can in Punjab, Haryana, and Uttar Pradesh. He said that Delhi may experiment with it first, and based on the efficacy of the alternative, the Centre will then consider implementing it in other states. But for a fact, there should be interference from the Centre, the new commission of the Centre, and the Supreme Court.”
Shri Gopal Rai said, “In Delhi, 40% of the pollution happens due to the stubble burning in the neighboring states. This year also, the spike in pollution is due to the massive stubble burning in Punjab and Haryana. Last month under the leadership of Chief Minister Shri Arvind Kejriwal, the Delhi government started sprinkling the bio-decomposer and today we have witnessed that 90% of the stubble has converted to manure. It shows how effective this process is. We believe that the central government and the state governments should also implement this method.”
“Arvind Kejriwal has sought time from the Union Environment Minister to discuss the air pollution situation of Delhi. The central government has not yet shown any kind of interest regarding this matter. We believe that the states of Punjab and Haryana should also come forward and adopt this method through which they can completely avoid stubble burning. I am also hopeful that the new commission set up by the central government will take up the issue of stubble burning on a priority basis and try to solve the matter. This year, the citizens of Delhi are suffering, but I definitely hope that at least from the next year the central government and the other state governments will be more careful about the pollution issue and will try to solve the problem,” he added.
Gopal Rai said that the Central government has shown no interest in this matter and due to their irresponsible behavior, the citizens of Delhi are suffering. The director and the senior scientists of the Pusa Institute are studying the use of the bio-decomposing solution and they have shown that not only the stubble got transformed into manure, but the capacity of the fields has also increased. He said, “If the Delhi government can implement such a method then the states of Punjab, Haryana, and Uttar Pradesh could have also done the same. But due to the irresponsible behavior of the central government, none of the states took up this initiative, which is why the citizens of Delhi are suffering today. If the neighboring states had taken steps to resolve the issue of stubble burning, the people of Delhi would not have to suffer from pollution during the Corona pandemic.”
By Lipakshi Seedhar: Staff Correspondent.

Farmer’s march is backed by political parties of Punjab and some organizations :Manohar Lal