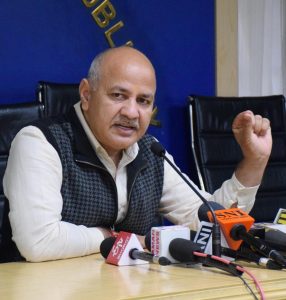 ”We have received 1700 compensation forms till now,”  Dy CM Shri Sisodia
* “6 Senior IAS officers will be heading the two-day verification drive in violence-hit areas of North East Delhi,” Dy CM Sisodia
New Delhi– Addressing a press conference here at the Delhi Secretariat on Friday, Deputy Chief Minister of Delhi, Manish Sisodia informed about Delhi Government’s decision to start a two-day verification drive to release monetary compensation for riot-affected families of North East Delhi.
“The Delhi Government has decided to launch a two-day verification drive for release of compensation to victims of violence in the North East region of Delhi. We have received 1700 compensation up till now,” said Dy CM Shri  Manish Sisodia.
“Restoration and rehabilitation work is going on at a very fast pace, in the riot-affected areas of North East Delhi. SDMs have been deployed to different parts of the violence-hit region.
Compensation forms are being given out to the grieving families and on the basis of these forms, the process of providing monetary compensation to the affected families has started.
We have given out Rs 25,000 as an immediate cash relief to them, and we have also collected compensation forms through which we can release the entire relief amount to the affected persons,” he added.
He also informed me that senior IAS officers will be heading the verification drive.
“Six senior IAS officers will be heading this two-day verification drive which starts tomorrow.
We want to get done with the verification process at the earliest so that we can release the full compensation amount to the affected families as soon as possible,” said Shri Manish Sisodia
The Delhi Govt. is facing the issue of duplication with a few of the forms received, hence the verification drive will be an important exercise.  “Our effort is to give full monetary relief to the people as soon as possible so that they can get their lives back on track,” he added.
Dy CM  Manish Sisodia also said that each floor of a house will be treated as one residential unit.
Five lakh rupees as relief money will be given to each residential unit- out of which four lakh is for the restructuring of the house and 1 lakh for belongings if the entire house is charred or burnt.
In case of substantial damage to the house, 2.5 lakh rupees will be provided- out of which 2 lakh is for the restructuring of the house while 50000 rupees is for belongings if belongings have been damaged too.
Monetary relief of Rs 5 lakh will be provided to schools as well (with less than 1000 students) if they suffered damage during the riots.
Schools with more than 1000 students will be given a cash relief of Rs 10 lakh.
“We also held a Parent-teacher meeting at short notice on 4th and 5th March 2020. The PTM was held at riot-affected schools of North East Delhi.
The idea behind holding the PTM that recorded at least 55% turnout of parents was to erase the fear from their minds and to encourage them to start sending their kids to school again,” said Dy CM Shri Manish Sisodia who also holds the Education portfolio.
Manish Sisodia had also visited Idgah Camp and interacted with the violence affected families.
By Lipakshi Seedhar