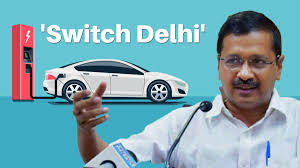 New Delhi February 13, 2021:  The first week of the Kejriwal government’s Switch Delhi electric vehicle campaign focusing on electric two-wheelers has garnered enthusiastic support from the public and industry alike. Delhiites have started switching to electric two-wheelers in large numbers. Since the launch of the Delhi EV policy in August 2020, 630 new EV two-wheelers have been registered and more are being registered every day.
The first week of the Switch Delhi campaign focused on generating awareness on the benefits of EV two-wheelers along with the benefits offered under the Delhi EV policy for those who want to make the switch from ICE (Internal Combustion Engine) vehicles to electric.
Transport Minister  Kailash Gahlot said, “Since the launch of Delhi EV policy, 630 new EV two-wheelers have been registered and more are being registered every day. Analysis by RMI India reveals that subsidies provided on electric two-wheelers under Delhi EV policy have made the upfront purchase price comparable to top-selling petrol two-wheelers. But the real saving is in operating cost. By switching to an electric two-wheeler, an individual can have monthly savings of approximately INR 1850 and INR 1650 compared to petrol scooter and petrol bike respectively, or an annual saving of approximately Rs 22,000 as compared to using petrol scooter and Rs 20,000 as compared to a petrol bike.”
The environmental benefits upon switching to Delhi are significant. Shri Gahlot said, “An average electric two-wheeler provides a lifetime savings of 1.98 tonnes of carbon emissions as compared to an average petrol two-wheelers. To put it simply, we need roughly 11 trees to sequester 1.98 tonnes of CO2. We can save our environment by making this switch and we owe this to our future generations.”
Responding to the Switch Delhi campaign’s call for Delhiites to step forward and share their experiences of switching to EVs under the #DilliKeGreenWarrior initiative, the following are the stories of four Delhiites who have switched to electric two-wheelers after the implementation of Delhi EV Policy:
Dalbir Chand Kohli, a businessman and a third time EV owner said, “Seven years ago, I was the first one to purchase an EV in Delhi. After Delhi Government’s EV policy, I purchased my third EV and got a subsidy of Rs. 7,700 and waiver of road tax and registration fee. I would definitely suggest that everyone switches over to an EV as it causes less pollution, is noiseless and can be charged very easily at home. I’ve had a great experience driving an EV.
Sanjay Beri, a businessman, recently purchased an EV and said, “I have switched to an EV and it has really helped me economically. I earlier had apprehensions but I’m quite impressed by its performance and the financial benefits it brings along. I hope there’s a nation-wide implementation of a similar policy since I think it is the need of the hour.”
Manvir Singh, a government employee and an EV owner said, “Delhi’s CM has urged the people of Delhi to take steps to curb the pollution. This motivated me to buy an EV – I thought about the financial benefits it will bring as well my contribution to my city. If like me, others also decide to make this switch, we can all help Delhi’s air quality become better. Charging of the vehicle is also very simple. I charge my EV using the normal electric point. One can also remove the battery and charge it anywhere. Under Delhi’s EV policy, I got a subsidy of Rs. 16,200 and Rs. 9,000 for road tax and registration were waived off. The Delhi Government’s EV Policy is very good and it inspired me to buy an EV. My friends and family want to buy and EV but they reside in Haryana and the state doesn’t have an EV policy like Delhi’s”.
Jitendar Kumar, a security guard and an EV owner said, “My electric bike functions smoothly and efficiently. I have been able to cut short my fuel expenses since I purchased my EV. My monthly salary is Rs 10,000 and I used to spend a lot of money on petrol. Now, I have been able to save around INR 3500 monthly that I used. This has helped me in managing my other expenses. Initially, I had apprehensions about buying an EV but the aspect of monthly savings and the smooth functioning of the bike helped me make my up mind about buying an EV. Like Delhi, other state governments too should bring in EV policies which would benefit the masses.”
The campaign has been received exceedingly well by industry leaders as well. Owing to the CM’s leadership in promoting zero-emission vehicles, many EV two-wheeler companies have decided to aggressively launch new vehicle models in Delhi. Praising the Delhi government’s initiative, Mr Rajiv Bajaj, MD of Bajaj Auto, said, “The comprehensive, pragmatic, & progressive EV policy of the Delhi government inspired us at Bajaj Auto to accelerate our plan to scale up our iconic electric Chetak as also to introduce electric avatars of our market-leading 3 wheelers. We look forward to working vigorously with the Delhi government to further the cause of a cleaner tomorrow for the city of Delhi.”
Tarun Mehta, Co-founder & CEO, Ather Energy said, “The Delhi Government has been rolling out progressive policies for the adoption electric vehicles. The Switch EV campaign should revive consumer interest about electric vehicles in the city. We have seen great response across launch markets for the Ather 450X and we will open our experience centre, Ather Space in Delhi in the next few weeks.” Many other EV two-wheeler companies such as Hero Electric, Okinawa and TVS have already launched several vehicle models in Delhi.
Switch Delhi is an eight-week mass awareness campaign by the Delhi Government to sensitize each and every Delhiite about the benefits of switching to EVs to the environment as well as to make them aware of the incentives and infrastructure being developed under Delhi’s EV policy. The campaign aims at informing, encouraging, and motivating each and every person in Delhi to switch from polluting vehicles to zero-emission electric vehicles.
By Varun Bharadwaj