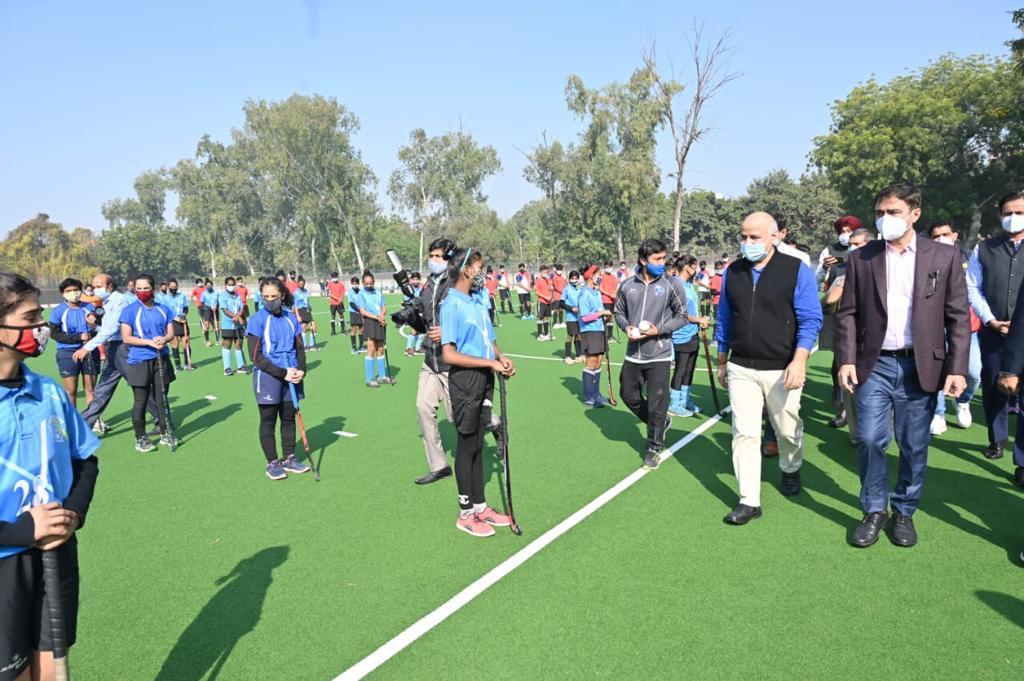 Delhi Dy CM Manish Sisodia inaugurated world-class hockey astro turf at Sarvodaya Bal Vidyalaya in Ashok Nagar; Olympic medalist Sushil Kumar in attendance*
*We have given world-class facilities to the sports people in Delhi, now we hope to see the players bring in medals for the nation: Sisodia*
New Delhi : 28.11.2020: Delhi Deputy Chief Minister Manish Sisodia inaugurated Delhi’s newly built world-class Hockey Astro Turf at Sarvodaya Bal Vidyalaya in Ashok Nagar today in a major boost to the sports infrastructure of the city. He said, “We have ensured world-class facilities to the players from a young age. It is now the responsibility of the coaches and players to make the country proud by bringing in medals, and showcasing their talent at international events.”
Sisodia said that Hon. Chief Minister Arvind Kejriwal is providing all the support to the promising players so that no talent is left behind because of basic lack to facilities and finances.
Renowned two-time Olympic medalist, wrestler Sushil Kumar was also present at the inauguration.
Sisodia said that the project cost Rs 5.78 crore to build this world-class hockey Astro Turf. “If the players get an opportunity to play on this ground, then I’ll consider this money recovered. But if no talented player plays here, or emerges out of here, then it’s all in vain. This is why I believe it is the responsibility of the school and the sports officials to ensure that players are able to use this ground, and its facilities.”
Sisodia said that this ground should not be a victim of government regulations. “Rules should be made as per the convenience and requirement of the players. The government is ready to be flexible to prioritise the players. Though the players should also follow a dedicated discipline so they can train, and develop their talent further,” he added.
Sisodia said that we are building four such world-class hockey astro turfs in Delhi government schools. He said, “This is the third ground, with two other turfs in Ghumanhera and Jhilmil. Additionally, four 400 meter racing tracks and world-class swimming pools have been built. Due to such facilities, the performance of government schools in Delhi has significantly improved in sports, and so has the medal tally.”
Sisodia said that the Delhi government has taken up the responsibility in providing every single promising player essential facilities for their sports training, and preparation. This includes building an international-style residential facility for sports people and a sports university. “Even players who bring in gold medals worry about their admission but we will give these players admission in Delhi’s Sports University,” he added.
Sisodia said that every state government offers financial support to sports people who bring in laurels, and medals. But five years ago, Chief Minister Arvind Kejriwal had said that it’s equally important to invest, and support the promising players when they’re sweating out in the grounds preparing for their sports journey.
“Keeping this in mind, we have started a scheme to help such promising players, in which annual amounts ranging from Rs 3.5 lakh to 16 lakh will be given,” said Shri Sisodia. He also added that the Delhi Govt. rewards medal-winning players more than any other state.
Sisodia, while encouraging the players, said, “If you play diligently, the Delhi Govt. is standing with you, and will spend as much money as you need. Just show us your talent; the rest of it is our responsibility.”
Shri Sisodia said that the world-famous field hockey players like Dhyan Chand and Dhanraj Pillai have also come up from similar grounds. “Now we hope to see more sports talent come out of these grounds, and make our dreams come true,” he added.
The sports branch of the Directorate of Education is committed to promote grassroots sports, and to provide holistic development to school students. With this objective in mind, various new schemes have also been introduced for intensive training of sportspeople.
This includes upgrading the sports infrastructure of the schools, scaling them up to international standards, and providing facilities like synthetic athletics tracks, synthetic badminton flooring, Astroturf hockey ground and more.
By Lipakshi Seedhar: Staff Correspondent.