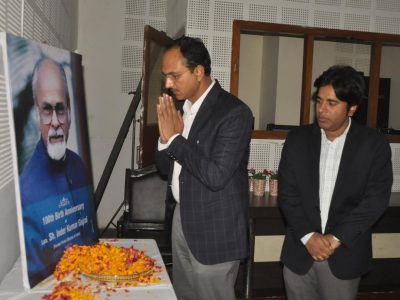 Addressing the gathering the Deputy Commissioner,  Khanna and Jalandhari described Gujral as a true patriot, an eminent statesman, able administrator and distinguished Parliamentarian besides a fine human being with rare qualities of head and heart. They said that  Gujral was a true son of the soil and has the distinction of being the first Prime Minister of the nation from Punjab. They said that the former Prime Minister would be ever remembered for his immense contribution in the progress of the state and prosperity of its people adding that he was a votary of idealism and morality in politics.

The Deputy Commissioner, Khanna and Jalandhari said that Gujral’s forthright initiatives in fostering goodwill, trust, peace and amity in Indian Subcontinent especially in strengthening Indo-Pak relations would ever be remembered by one and all. They said that being a multi-faceted personality Gujral was an institution in himself, who played a proactive role in promoting the ethos of democracy by strengthening the bonds of national integration, communal harmony and universal brotherhood. They said that Gujral had deep regard and passion for Punjabi culture, language and literature adding that he was a true votary of Punjab, Punjabi and Punjabi.

On the occasion, students of Indo German School regaled the audiences with cultural items.