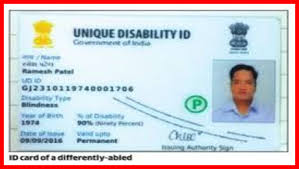 SAYS CARD COULD BE APPLIED AT SEWA KENDRAS, GOVERNMENT HOSPITALS AT THE DISTRICT/ BLOCK/ TEHSIL LEVEL OR ONLINE PERSONALLY

Jalandhar, December 8, 2020:   Deputy Commissioner Ghanshyam Thori said that specially-abled persons can apply for the Unique Disability Identity Card (UDID) at the Sewa Kendras or at the Government Hospitals at the District/ Block/ Tehsil level or online personally.

er said that in a major reprieve to the specially-abled persons the government has decided to issue UDID to them and to get themselves enrolled for the card, the specially-abled people can apply themselves, through Sewa Kendras or government hospitals by bringing their Adhaar Card, Voter Card or any proof of age, passport size photograph and others.

He said that for the medical examination, special camps are being organized in Civil Hospital on Tuesday and Thursday and applicants can visit the hospital where orthopedics, ENT and EYE specialists, psychiatrist, pediatrics and others physically examine before issuing disability certificate.

He said that the cards are being issued not only to encourage transparency, efficiency and ease of delivering the government benefits to the person with disabilities but to also ensure uniformity.

The Deputy Commissioner said that cards would also help in streamlining the tracking of the physical and financial progress of beneficiary at all levels of the hierarchy of implementation – from village level, block level, District level, State level and National level.  He said that this would be a huge reprieve to specially-abled persons as they would not have to visit the hospitals again and again to get a medical certificate.

Likewise, he added that the UDID would be the only document to extend the benefits of government schemes to specially-abled persons.

Nodal Officer UDID scheme Dr. Anu said that UDID would be having a Quick Response (QR) code that would be helpful in ascertaining the credentials of specially-abled persons.

She added that the card would also help in ensuring free travel to visually challenge government buses besides providing 50% concession to other specially-abled persons in them.