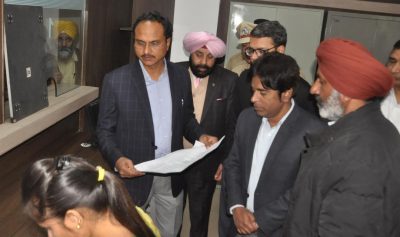 Accompanied by Additional Deputy Commissioner Jasbir Singh, the Deputy Commissioner dedicated two newly constructed Fard Kendras for Sub Division Jalandhar I and Sub Division Jalandhar II. Sharma said that the new fard kendras have been set up in consonance with the commitment of the state government led by Punjab Chief Minister Captain to provide citizen-centric services to people in a smooth and hassle-free manner.

He said that the move was aimed at facilitating the people in getting the copies of Revenue records at the earliest.

The Deputy Commissioner said that there were a total eight counters in the two Fard Kendras to ensure speedy delivery of the documents to the people. He said that separate dedicated counters have been set up for the senior citizens especially able people visiting the fard kendras.

Sharma said that the provision of adequate sitting arrangements has also been made in the Fard Kendras to ensure that they do not face any problem.

The Deputy Commissioner further said that dedicated staff has been deployed at the Fard Kendras to ensure speedy delivery of services to them.

He said that besides applying for the certified copy of land record (fard), the residents could also apply for entering mutations, incorporating say orders issued by courts/ authority in Revenue record, preparation of fard Badar, preparation of Naksha Urra for all co-sharers, issuance of warrant of possession in partition cases and preparation of normal rates in regard to case of Rent (Tenancy Act).