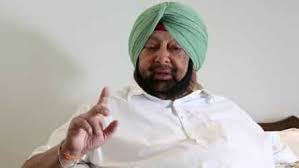 Chandigarh, September 15, 2020: Punjab Chief Minister Captain Amarinder Singh has demanded an unconditional apology from Union Minister Raosaheb Patil Danve for misleading the nation on the farm ordinances issue from the floor of the House in a clear and complete breach of Parliamentary principles and propriety.

Rejecting as totally incorrect Danve’s statement in the Lok Sabha yesterday about Punjab being on board the anti-farmer ordinances, the Chief Minister said the remarks of the Minister of State for Consumer Affairs, Food & Public Distribution were aimed at defaming the Congress and its government in the state. PPCC chief Sunil Jakhar also slammed the Union Minister for violating the sanctity of Parliament with his false statement on the issue in the House on Monday and termed it an attempt to denigrate the Congress government in Punjab with misleading information.

The Chief Minister said, in a statement, that at no point did the high-powered committee make any suggestion about bringing these anti-farmers ordinances, which the Centre introduced on the sly amid the pandemic and has now placed in Parliament for enactment through false pretensions.

The minister should apologise immediately and unequivocally for presenting false facts in the Lok Sabha, said Captain Amarinder, describing the statement in Lok Sabha as undemocratic and unethical, and a violation of the parliamentary principles. The Parliament is the shrine for upholding the ideals of democracy and any attempt to defy these principles is dangerous for the nation’s Constitutional foundations, he added.

The Chief Minister said his government has consistently and persistently opposed any move to dilute the rights and interests of the farmers, not only in the high-powered committee on agricultural reforms but in the state Assembly and on all public forums. It was his government which had initiated the resolution in the Vidhan Sabha rejecting the ordinances, he pointed out, adding that he personally had written twice to the Prime Minister seeking the withdrawal of the anti-farmer and anti-farmer legislation that would spell the death-knell of the farming community in Punjab.

The report of the high-powered committee, of which Punjab was made a member weeks after it was constituted, nowhere suggested any ordinance or central law to be enacted by the Government of India, said the Chief Minister, emphatically rejecting any claim to the contrary.

In fact, said Captain Amarinder, the focus of the report was largely on market reforms wherein the implementation of APMC  Act 2003/APLM Act, 2017, had been emphasised. Similarly, adoption of the Model Contract Farming Act or its variants depending upon the state requirements had been stressed upon in the draft report.

In its response to the draft report, the Punjab government had clearly stated that 86% of the state’s farmers are smallholders cultivating less than 2 ha with little bargaining power in the market. They are illiterate or less educated and cannot be left at the mercy of market forces for determination of commodity prices, the state government had further said.

Pointing out that some states like Punjab are dependent on the market fee, his government had further underlined that “the market needs to be monitored/regulated to save the farmers from exploitative private trade.” The farmers must receive reasonable prices for their produce (MSP) which covers their cost of production and a fair level of profit for their living, it had commented.

The state government’s response further stated that “the majority of the farmers are fearful of entering into contracts with large corporate houses…they feel that they may not be able to compete with them in case of any litigation.”

Going further, his government, said the Chief Minister, had categorically and unambiguously that with a view to safeguard the interest of farmers and to ensure the food security in the country, “it is emphasised that SYSTEM OF MININUM SUPPORT PRICE AND THE ASSURED PROCUREMENT OF CROPS BY GOVT. OF INDIA MUST CONTINUE.” It had gone ahead to recommend that other MSP crops where full and assured procurement is not being undertaken by Govt of India such as cotton, maize, oilseeds and pulses should be procured fully at MSP fixed by Govt of India to encourage farmers to diversify away from paddy which is water-intensive.

Captain Amarinder pointed out that the state government had, in its written response, also said that “the EC Act must be continued for those crops in which India is deficient in order to prevent the exploitative action of the private sector by hoarding and black marketeering.” The price trigger suggested in the report for any action on stock limits are required to be lowered from 100% increase in case of horticulture produce and 50% increase in case of non-perishables, it had further stated.

The sharing pattern of most of the schemes is 60:40 (Centre: State) and this needs to be changed to 90:10 for Punjab state, as the state, while pioneering the green revolution in the country, played a major role in making the nation self-reliant in foodgrain production, the Punjab government had submitted, adding that it was now the Centre’s turn to support the farmers.

The state government had also made several suggestions in its response on Agricultural R&D, including a reduction in technological gaps in various crops/cultivated areas of the country by strengthening agriculture extension services and substantial enhancement in the allocation of funds for research by the Centre, as well as dedicated funds for capacity building of agricultural scientists in new areas of research in advanced labs of foreign countries.