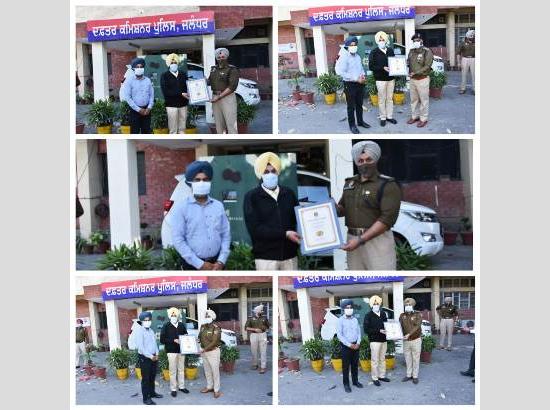 Jalandhar, February 27, 2021: In a rare distinction 17 Police officers of Jalandhar Commissionerate Police including five Assistant Commissioners of Police, three Inspectors, two Assistant Sub Inspectors, four head constables and three constables working on the frontline during the curfew in wake of Covid 19 have been awarded Director General of Police’s Disc for Exemplary Seva to Society’ by Commissioner of Police Gurpreet Singh Bhullar.

Meanwhile, pinning the disc on these officers, the Commissioner of Police recalled the hard work done by these officers during the Corona crisis. He said that these officers played a vanguard role to save the precious lives of people during the grave crisis of Covid pandemic. Mr. Bhullar said that this disc was aimed at recognizing the exceptional work done by Punjab Police and other officials working on the front lines of the COVID-19 operations and response activities in the state.

On the occasion, the Assistant Commissioners of Police Balwinder Iqbal Singh, Mr. Bimal Kant, Om Parkash, Kanwaljeet Singh and Harsimrat Singh, expressed their gratitude to the Director General of Police and Commissioner of Police for choosing them for this coveted award. These officers said that they were overwhelmed at being chosen for the rare honor adding that this award has filled them with a renewed zeal to serve the society. These officers also thanked the Commissioner of Police for giving them valuable guidance in performing their duty efficaciously.