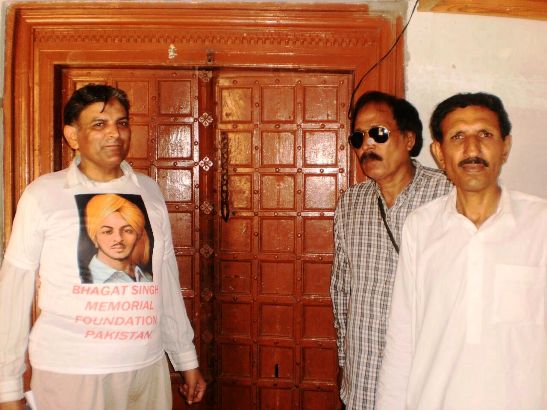 Ferozepur October 19, 2017: (TNL Bureau): Convert Line of Control –LoC into Line of Comprise, appealed Imtiaz Qureshi, Advocate from Pakistan over the phone, to both Indian and Pakistan governments.

Qureshi, Advocate in Pakistan is pursuing the innocence of Shaheed Bhagat Singh in Lahore High Court.

Wishing a Happy Diwali, Qureshi said, there is a need to have the track of love on the line of control to end the fight between the two countries.

Qureshi is the Founder Chairman of Pak-India Bhagat Singh Memorial Foundation, Lahore, who is fighting to prove the innocence of martyr of Bhagat Singh in Lahore High Court to prove his innocence, having no mention in the FIR lodged on,  has filed a fresh petition in the court for an early hearing.  He loves Bhagat Singh and his ideology from the core of his heart.

Qureshi said, both the citizens of India and Pakistan love each other but the political leaders are the major obstacle in making easy the visa process to further narrowing the gap between the two countries to come closer to each other.

He also shared a photograph of  Bhagat Singh’s ancestral house at Bangay village, Jaranwala Tehsil in the Faisalabad (Lyallpur) district of the Province.