Home » Contract farming can be an answer to farmers’ indebtedness 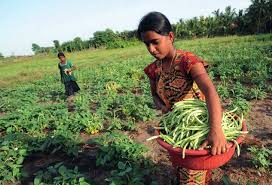 CHANDIGARH— All these years, small farmers have been finding it difficult to fully participate in the market economy. As a result, there is a continuation of the drift of populations to urban areas. Attempts by the government in the recent past to arrest this drift have brought changes in the agriculture laws in a bid to indentify income generation activities. Unfortunately, hue and cry was made about contract farming by vested interest and put forward a number of rumours among the farmers. They fear that it would take away their land holdings by the big corporate and at the end they will become landless.                                  Contract farming has existed from time immemorial. In ancient Greece the practice was widespread, with specified percentages of particular crops. China also recorded various forms of share cropping. In USA share cropping agreements are allowed for between one-third and one-half of the crop to be deducted for rent payment to the landowner. Well-organized contract farming does, however, provide such linkages, and would appear to offer an important way in which smaller producers can farm in a commercial manner. Similarly, it also provides investors with the opportunity to guarantee a reliable source of supply, from the perspectives of both quantity and quality. These practices were a form of serfdom and usually promoted permanent farmer indebtedness.

Contract farming is an agreement between farmers and processing or marketing firms for production and supply of agriculture products at pre-determined prices.

With effective management, contract farming can be a means to develop markets and to bring about the transfer of technical skills in a way that is profitable for both the sponsors and farmers, say experts here. The approach is widely used, not only for tree and other cash crops but, increasingly, for fruits and vegetables, poultry, pigs, dairy produce and even prawns and fish. Indeed, contract farming is characterized by its “enormous diversity”2 not only with regard to the products contracted but also in relation to the many different ways in which it can be carried out.

The contract farming system should be seen as a partnership between agribusiness and farmers. To be successful it requires a long-term commitment from both parties. Exploitative arrangements by managers are likely to have only a limited duration and can jeopardize agribusiness investments. Similarly, farmers need to consider that honouring contractual arrangements is likely to be to their long-term benefit.

It is becoming an increasingly important aspect of agribusiness, whether the products are purchased by multinationals, smaller companies, government agencies, farmer cooperatives or individual entrepreneurs. As noted above, the approach would appear to have considerable potential in countries where small-scale agriculture continues to be widespread, as in many cases small-scale farmers can no longer be competitive without access to the services provided by contract farming companies. It must be stressed, however, that the decision to use the contract farming modality must be a commercial one.

It is not a development model to be tried by aid donors, governments or non-governmental organizations (NGOs) because other rural development approaches have failed. Projects that are primarily motivated by political and social concerns rather than economic and technical realities will inevitably fail, says an expert. ( Photo: Courtesy: fao.org ).

Yours murders are bad than ours.

Reflections are here in  Mahabharta, Are we ready to face them?