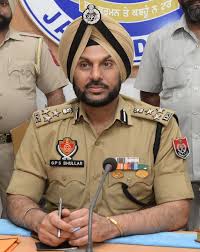 The accused have been identified as Suraj Kumar, Palwinder Singh of Jagpalpur village, Kapurthala, Gurukaran of Nagar village and Yatin of Bandala Patti and Ghodha.

Divulging the details, Deputy Commissioner of Police Gurmeet Singh said Somil of Krishan Nagar complained to police that he has dry fruit business in Fentonganj Market and on August 13 around 8.15 pm, when he was depositing the cash in SBI ATM in Shastri Market, suddenly four unidentified barged into ATM kiosk and attacked with sharp-edged weapons and fled away from the spot.

He said acting on the leads from the technical investigation, a police party of Navi Baradari Police station laid a trap near Dakoha railway crossing and nabbed four of the accused.

He said that the accused would be produced in the local court and police would seek their custody for questioning regarding other criminal incidents.