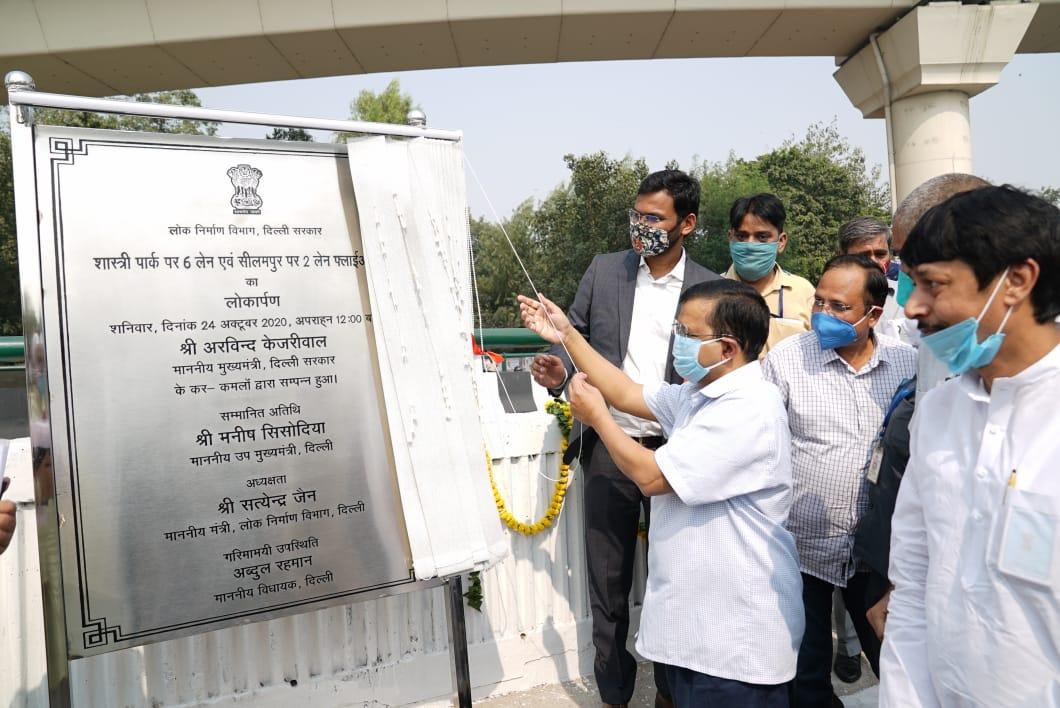 Arvind Kejriwal said, “First of all, I want to congratulate the residents of East Delhi for these two flyovers. The people of East Delhi used to face long traffic jams for longer hours. But now, the journey from ISBT to UP border can now be completed within a span of 10 minutes without any traffic jams and with a smooth ride. The flyover constructed is of good quality. The tender sanctioned for this project was ₹303 crore, but such is the honesty with which the AAP government functions that our engineers saved ₹53 crores. With a great construction quality, built under ₹250 crore, this piece of magnificence is both economical and effective. Since the inception of the AAP government in Delhi, we are saving money on all projects. The AAP government has been saving money in every project. And it’s the first time in 70 years in the history of India, that a government has completed projects with significant savings, and at a cost which is less than the sanctioned cost.”
“We, yesterday, laid the foundation stone for the new state of the art wing, a 1500-bedded medical block at LNJP Hospital. In India, governments are known to build hospitals worth ₹1500 crore with each bed costing around Rs. 1-1.5 crore. For instance, a 1000-bedded hospital would cost around Rs 1500 crores at a cost of Rs 1.5 crore per bed. But, we are building a hospital consisting of 1500 beds, cutting edge technology, fully air-conditioned, at a per bed costing of only Rs. 30 lakhs. Now, these Rs 53 crores which are saved through this construction, was earlier used by ministers to fill their own pockets or as bribes. This was the money that came from the innocent citizens of Delhi. But we do not indulge in bribes and taking money from officials or engineers, and we are saving the money of the citizens. It is with this money of the people that we save, that we are able to provide free amenities, healthcare, medicines, quality education to our citizens. No previous governments or any previous CM paid heed to the issues of the people of East Delhi. They were always alienated. But, because I used to live there before becoming a CM, I am well aware of the problems faced including hours of traffic jams. After the AAP government came into power, a signature bridge was constructed for the ease of the citizens residing in East Delhi. And I’m certain that these flyovers will contribute further towards providing them a hassle-free ride. In the last five years, a lot of progress has taken place in this area, including establishing water and sewer connections, etc. You all are lucky to be living in the national capital. And I truly believe that, because Delhi is the national capital of India, the people of Delhi should get all the world-class amenities. The people are proud of being the citizens of Delhi because they are being provided with these amenities. And, with back to back projects being inaugurated, in the last five years, it has been our endeavor that we have achieved what we have envisioned for our city. I would like to congratulate PWD officials for completing this project in a lesser time and with lesser funds.”
PWD Minister Satyendar Jain said, “Today 2 flyovers have been inaugurated by the Hon’ble CM. The Azad market flyover constructed by MCD took 10 years and costed Rs. 700-800 crore. Whereas, PWD took 1.5 years, out of which if we exclude 6 months of Covid and 3 months of GRAP  (Graded Response Action plan), it took only 9-10 months to build,  which in itself is an achievement. The CM has also envisioned a children’s park under the flyover, and very soon that vision too will be transformed into reality.”
The foundation stone for the newly-constructed flyover was laid by CM  Arvind Kejriwal on 10th February 2019. Due to the rising levels of pollution and the implementation of GRAP guidelines in 2019, construction projects were banned during the night which brought the flyover construction to a standstill. However, the flyover was 70% completed until October 2019, and despite the implementation of anti-construction guidelines and a 6-month halt due to the Corona lockdown, the project was completed in a time duration of 19 months.
The Shastri Park flyover consists of six lanes and is constructed at a length of 700 meters, whereas the Seelampur flyover is constructed at a length of 1200 meters and eases the commute of vehicles traveling over the Dharampura crossing towards Shahdara. The construction of the new flyover will bring relief to around 1.5 lakh vehicles which seem to travel through the route daily.
By Lipakshi Seedhar: Staff Correspondent.