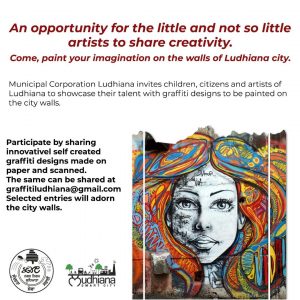 Ludhiana, November 27, 2020:  Punjab Food, Civil Supplies & Consumer Affairs Minister  Bharat Bhushan Ashu today informed that a massive beautification drive would be started by the Municipal Corporation Ludhiana. He said that under this drive, residents, including children and artists, would be allowed to paint and maintain graffiti in different parts of the city.

Ashu informed that the themes allowed for Graffiti are Sports, Health, Punjab Culture, Industry, Make in India, Make in Ludhiana, Environment and Social Issues. He said that permission will be granted from Municipal Corporation Ludhiana on the email request of residents, which can be sent at graffitiludhiana@gmail.com.

He said that one would have to maintain the graffiti for two years or it will be allotted to someone else, anyone damaging graffiti with posters or any other way will be fined a minimum of 10,000 plus repair cost and Municipal Corporation and Smart City Logo has to be placed on the graffiti. Similar space will be allotted for the sponsor logo.