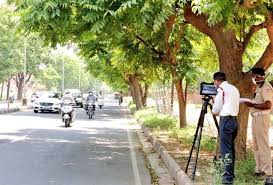 Chandigarh January 24, 2021: The stick-and-carrot strategy, adopted by the Chandigarh Traffic Police to make travel on the city’s roads less painful, has clicked. Stepped up challenging of the habitual offenders, coupled with an intensive drive to educate vehicle owners, especially youngsters, on traffic rules, has paid rich dividends and brought the Chandigarh Police a pat on its back.

“The Chandigarh Police have been working on a two-pronged strategy. While we are educating people, especially youngsters and imparting them training in traffic rules, on the other hand, we are vigilant about traffic rules violations and quite strict with the offenders,” told a police officer to this reporter.

Besides, the Chandigarh Traffic Police have been organizing road safety exhibitions/workshops in schools, colleges and at public places as a part of the road safety awareness program. The education branch also distributed thousands of pamphlets/booklets among the people to spread awareness about the road safety rules.

What is more, the traffic police are also celebrating ‘Road Safety Week’ from January 18 to February 17. During this period, from a rickshaw puller to car drivers will be aware of the traffic rules. Cyclists will be guided and aware to use cycle track while on a bicycle.