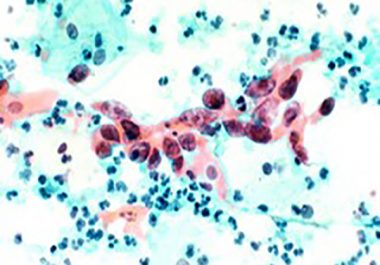 The incidence of cervical cancer has been decreasing in the United States in recent decades, a trend that has been aided by the implementation of HPV vaccines. However, it is estimated that more than 4,000 people in the United States died from cervical cancer in 2020. Like most cancers, the majority of these deaths occur if the disease is diagnosed after the cancer has metastasized—the five-year relative survival when the disease has spread is less than 17 percent.

Highlighted below are a few recent studies that focus on the effect of HPV vaccination on the rates of invasive cervical cancer, effective screening approaches for medically underserved populations, and latest advances in cervical cancer treatment.

PREVENTION: HPV VACCINATION FOR THE REDUCTION OF INVASIVE CERVICAL CANCER

As of May 2020, 128 countries and territories have introduced a national immunization program for HPV vaccination, with an additional 41 countries and territories projected to include an HPV vaccine in the routine immunization schedule by the end of 2023. While studies have established that HPV vaccination can prevent HPV infection, genital warts, and high-grade precancerous cervical lesions, there is a paucity of data determining the impact of HPV vaccination in reducing invasive cervical cancer rates, due in part to the longer follow-up time required for such analyses.

A recent study published in the New England Journal of Medicine reported on the association between receipt of a quadrivalent HPV vaccine (covering HPV types 6, 11, 16, and 18) and the incidence of invasive cervical cancer among nearly 2 million girls and women (aged 10-30 years) in Sweden. After adjustment for age at follow-up, calendar year, and residential and parental characteristics, the researchers found that vaccination reduced the risk of developing invasive cervical cancer by 63 percent. Additionally, the authors found that the reduction in incidence of invasive disease was more pronounced among those who were vaccinated at a younger age: Women who were vaccinated before the age of 17 had an 88 percent reduced risk of developing invasive cervical cancer, while women who were vaccinated between the ages of 17 and 30 had a 53 percent reduced risk.

Similar results were recently published in Cancer Epidemiology, Biomarkers & Prevention, a journal of the American Association for Cancer Research. This study looked at the trends of invasive cervical cancer during 1999 to 2017 among women aged 15-29 years in the United States to examine the effect of HPV vaccination (the quadrivalent vaccine was introduced in 2006 and was recommended for females aged 11-12). In this time frame, a total of 13,231 invasive cervical cancer cases were reported, with 67.5 percent of cases being squamous cell carcinoma (SCC) and 23.1 percent of cases being adenocarcinoma (AC). The researchers found that both SCC and AC incidence rates decreased in this time span, with the largest drop in SCC incidence occurring in women aged 15-20 during the years 2010-2017, and the largest drop in AC incidence occurring in women aged 15-20 during the years 2006-2017.

According to data from the National Institutes of Health (NIH), screening for cervical cancer has been decreasing in the United States since 2000. Further, specific populations—including Hispanics, certain members of the LGBTQ community, those of lower socioeconomic status, and those with lower education levels—have reduced rates of cervical cancer screening. It has been reported that these populations also have increased incidence of cervical cancer.

The authors identified several trends for screening preferences: The vast majority of patients preferred an HPV self-test to a Pap test, and most patients preferred providers who shared their sociodemographic characteristics, such as gender and language. The authors note that such preferences should be incorporated when developing screening programs and policies for those at increased risk of developing cervical cancer. They add that not accounting for the specific preferences of medically underserved individuals could further widen the disparities in cervical cancer incidence and mortality.

Standard treatments for patients with cervical cancer include surgery, radiation therapy, chemotherapy, and targeted therapy. Recently, immunotherapy has also become a standard treatment option for patients with advanced disease—in 2018, the checkpoint inhibitor pembrolizumab (Keytruda) was approved by the U.S. Food and Drug Administration (FDA) for the treatment of patients with recurrent or metastatic cervical cancer with disease progression during or after chemotherapy whose tumors express PD-L1. This approval was based on results from the phase II Keynote-158 trial, which reported an objective response rate of 14.3 percent after a median follow-up time of 11.7 months.

Building on this approval, a phase II clinical trial is evaluating the combination of pembrolizumab with the therapeutic DNA vaccine GX-188E. This vaccine encodes for the oncoproteins E6 and E7 found in HPV types 16 and 18. Patients enrolled in this clinical trial have advanced, inoperable, or metastatic cervical cancer that is positive for HPV 16 and/or 18.

Results from an interim analysis of this trial were recently reported in Lancet Oncology. In the 26 patients evaluable for response, the overall response rate was 42 percent, with 15 percent having a complete response and 27 percent having a partial response. While all of the complete responses occurred in patients who had PD-L1-positive tumors, responses were also observed in patients with PD-L1-negative tumors. Results from this trial were previously presented during the AACR Annual Meeting 2020 and were covered in this post.

Additional immunotherapeutic strategies are also under investigation for the treatment of cervical cancer, including treatment with the checkpoint inhibitor nivolumab (Opdivo) in the phase I/II CheckMate 358 clinical trial. Initial results reported an objective response rate of 26.3 percent among 19 patients with recurrent/metastatic cervical cancer.

For more information about cervical cancer, check out this resource from the AACR.

Do Patients With Cancer Have Prolonged Viral Shedding Following Infection With SARS-CoV-2?