Home » CEO thanks people of Punjab for ensuring peaceful poll 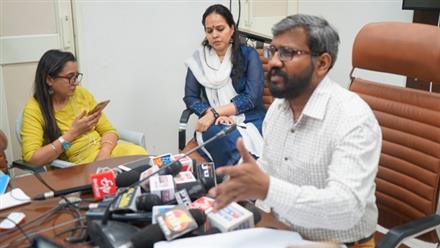 Chandigarh,May 20,2019( By SK.Vyas): The Punjab today witnessed overall peaceful single phased poll to elect 13 representatives for Parliament. Till the filing of news report 62.07 voting percentage was recorded in Punjab.
Thanking the people of Punjab for coming out in large numbers to exercise their democratic right despite hot weather, Dr. S. Karuna Raju, Chief Electoral Officer Punjab said that by conducting themselves responsibly the people of Punjab have set an excellent example. He said that the s of ECI was to ensure a aceful poll in a free and fair manner. He said that it was a matter of great satisfaction that 117 all women polling stations also saw large numbers of voters. Raju said that the main feature of this election was deputing of 9390 micro-observers in addition to 17 General Observers, 7 Police observers and 19 expenditure observers of ECI.

He said that in the morning during mock poll 290 ballot units, 219 control units and 508 VVPAT machines were replaced and 169 ballot units, 88 control units and 695 VVPAT were replaced during the conduct of the . He also said that there was not a single case of disruption of poll and inducement of voters that was brought to the notice of the Commission during the day.
Raju thanked over 1.25 lack polling personnel more than  25,000 CAPF Security Personnel and 75,000 Punjab Police Personnel for working day and night to ensure free, fair and peaceful poll in the State. He also thanked PWD coordinators, Volunteers of NCC/NSS, Aanganwadi workers, Mid-Day-Meal workers and watchmen for contributing in the election process.
Giving details on law and order front, Dr. Raju said that an incident of firing has been reported from Talwandi Sabo in Bathinda where the scuffle took place between supporters of two rival groups. Besides, the firing was reported in which two persons got injured. An FIR was registered in this case against 12 persons and 15 unknown persons. A similar incident occurred in village Sarali Kalan of PS Verowal, District Tarn Taran where Bunty S/o Charanjit Singh was killed by a sharp-edged weapon. This murder was committed by accused of personal enmity and has got no relation with Lok Sabha Election. FIR has been lodged against Sukha, Gora and Soni S/o Randhir Singh.

He further said that in Adampur (District Jalandhar) a minor verbal dispute arose between supporters of SAD and Congress Party.  The administration diffused the situation.
Dr. Raju said that 3 cases have been registered for posting videos/photographs while voting. The cases have been registered in Gurdaspur, Ludhiana and Rupnagar District under various sections of Law.
In another case of violation of the model code of conduct, Mohan Fiber Company has been sealed for not observing holiday under Negotiable Instrument Act 1881 announced by ECI. Action has been initiated by labor and  Pollution Control Department in this regard.

900 SECURITY PERSONNEL FROM STATE POLICE, PAP AND PARA MILITARY FORCES DEPLOYED FOR PROTECTION OF EVMs ROUND THE CLOCK
Three-tier security at Counting Center besides 24×7 CCTV Surveillance arrangements in Ferozepur
Comment