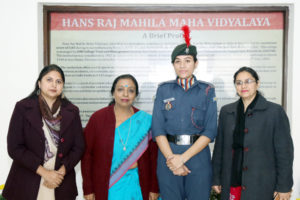 Jalandhar January 26,2020  :Cadet Parneet Kaur had brought laurels to Hans Raj Mahila Maha Vidyalaya as she is selected for the Youth Exchange Program (YEP) 2019-20 as a part of Indian delegation to Nepal. YEP is the highest and most prestigious camp in NCC where the cadets are chosen to represent India in friendly foreign countries. 13 cadets are selected for YEP from Punjab, Haryana, Himachal Pradesh and Chandigarh directorate in RDC 2019. YEP helps cadets to meet youth leaders from other countries and foster mutual understanding between the host nations and India.

Principal Prof. Dr. (Mrs.) Ajay Sareen congratulated Cadet Parneet Kaur, NCC Coordinator Mrs. Saoni Sharma and Air Wing Incharge Mrs. Purnima. She said that a team of 16 cadets is formed for Nepal delegation and she is the only one from Punjab, Haryana, Himachal Pradesh and Chandigarh directorate for this delegation.

KMV NCC Unit of 2020 Ready for a Strong Role

HMV became the first choice of students for skill