Home » CBI files supplementary Chargesheet against 28 accused in a Scam 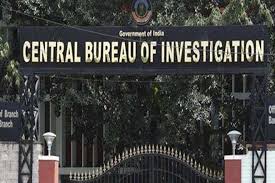 It was alleged in the supplementary charge sheet that the said then Revenue Officer along with other police officials of Bangalore had closed the inquiries/verifications conducted by them into the complaints and information received against the said private company based at  Bangalore.  It was further alleged that the accused did not take necessary action under Law, including KPIDFE Act 2004 and instead had given clean chit & recommended closure of the complaints stating that the said private company had not indulged in any illegal acts. It was also alleged that the illegal activities of said company had continued unabated and several thousands of investors had lost crore of rupees.

It may be recalled that CBI had registered 4 cases in connection with the said scam. CBI had earlier filed several charge sheets in the scam.  This is a scam involving unauthorized deposits allegedly collected from a large number of depositors to the tune of Rs.4000 crore (approx.).

The public is reminded that the above findings are based on the investigation done by CBI and evidence collected by it. Under the Indian Law, the accused are presumed to be innocent until their guilt is finally established after a fair trial.

CBI registers case against former CBI Officer and Six others