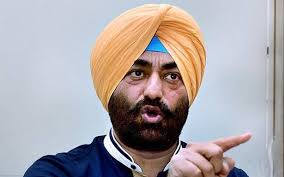 In a statement issued here Khaira said that BJP was hell bent to appease dera leaders with an eye on dera support during assembly elections in Haryana later this year. He said that SIT of Punjab Police led by DIG Ranjit Singh Khatra had established role of dera followers in the sacrilege cases but the then Chief Minister Parkash Singh Badal had shifted the two cases from Punjab police to CBI in an apparent bid to save the accused. Badal knew that his party would not return to power and took the decision when assembly elections were close.

Khaira said that the murder of Mahinder Singh Bittu a dera man, an accused in the sacrilege case in Nabha jail and bail granted to remaining five accused by the Punjab and Haryana High Court were result of political conspiracy. He alleged that with the murder of Bittu, the evidence of involvement of Badals in the sacrilege cases has been eliminated.

He added that CBI had failed to take forward the probe even as SIT led by Khatra had blamed dera followers mainly responsible for sacrilege cases.  He said that Justice Zora Singh commission and later Justice Ranjit Singh Commission had also pointed out involvement of dera followers in the sacrilege of Guru Granth Sahib. He said that SIT formed under IGP Kunwar Vijay Partap Singh in the Behbal Kalan firing and involvement of SAD leaders in the sacrilege cases had also lost its track after murder of Bittu and CBI closure report in the two cases.

Khaira said that Chief Minister Capt Amarinder Singh had stabbed Sikh community in the back by misleading them on probe in the sacrilege cases. He said that Punjab Vidhan Sabha had passed unanimous resolution to get back from CBI the probe of sacrilege cases. Capt Amarinder Singh however didn’t exercised any legal and administrative steps to implement the resolution and allowed cases to collapse.

He sought an explanation from Badals on their role in the BJP’s attempts to bail out dera followers of sacrilege charges. He reminded that it was Sukhbir Singh Badal who had forced Akal Takht to exonerate dera Chief Gurmit Ram Rahim Singh and now his party is in alliance with BJP in Haryana.