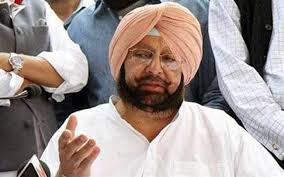 BATALA,OCTOBER 25,2019:Punjab Chief Minister Captain Amarinder Singh on Thursday hailed the Congress victory in three of the four Assembly segments where bypolls were held, particularly in Sukhbir Badal’s self-proclaimed stronghold of Jalalabad, as a total rejection of the negative agenda of the Akalis, who continued to indulge in petty politicking in the wild hope of regaining the confidence of the people.
The ‘referendum’, as the Akalis had been so keen to dub these byelections, was clearly not in their favour, and the people of Punjab had once again denounced SAD’s unconstructive policies for his government’s development programmes, said the Chief Minister.
Though he had personally not looked at these polls as a referendum on his regime, which had already fulfilled the bulk of its promises to the people at the half-way mark of its term, Punjab had shown what they wanted from their government, Captain Amarinder asserted. If the Akalis looked at it as a referendum, then they have got their answer from the people, he added.
These polls, said the Chief Minister, had once again exposed the hollowness of the claims of the Akalis, particularly the Badals, that they had the support of the people. The Akalis clearly failed to learnt a lesson from their previous electoral defeats and continued to engage in negative campaigning, including politicisation of religion, he said, adding that the people of Punjab had made it clear that there was no place in the state for parties that do not think and work for their welfare.
Talking to mediapersons here, the Chief Minister congratulated all the Congress workers in Punjab for working hard as a united force to make the party’s continued run of poll victories possible.
While describing the party candidate’s defeat in Dakha as “unfortunate”, the Chief Minister lauded Captain Sandeep Sandhu for giving a tough fight in his first election. “I had wanted and aimed for winning all four seats in these bypolls but one can’t win 100%,” he said. The losing candidates should not take such failures to heart, he said, recalling that he had also lost his first two elections.
Victory and loss were part of the electoral process and did not necessarily reflect on the party’s or the candidate’s strength or weakness, he added. He expressed the confidence that like Jalalabad, Dakha too would eventually realise that the Congress alone could ensure its development and progress.
After the sufferings perpetrated on them by SAD-BJP for 10 years, the people of Punjab want to look forward, towards an era of growth, and have categorically rejected the divisive and regressive policies of the Opposition, said Captain Amarinder.

CP orders strict enforcement of Covid-19 protocol in the city

ICCW to bestow bravery Award upon Kusum of Braveheart