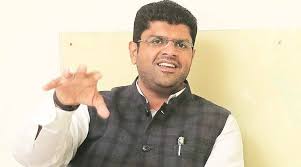 Chandigarh, January 30, 2021: Haryana Deputy Chief Minister, Dushyant Chautala said that by the end of the current financial year, the internet facility and the system will be improved in the offices of Excise and Taxation Department. Besides this, work on model-one software for GST is currently underway and model-two software for GST will soon be started on which newly appointed officers will be deployed.

Deputy Chief Minister, Dushyant Chautala was speaking as the Chief Guest at the conclusion of the training programme held 46 Excise And Taxation Officers and 19 Revenue Officers at Haryana Institute of Public Administration (HIPA) in Gurugram.

He said that both the Excise and Taxation and Revenue departments are considered to be the backbone of any Government as both these departments give revenue to the Government.

He directed the officers of Excise and Taxation and Revenue Department that along with the task of speeding up the economic progress of the state, they have to work day and night to develop the best infrastructure. He said that today Haryana is counted among fastest growing state in the Country.

Referring to the Excise and Taxation Department, Deputy Chief Minister said that before COVID-19 the department had been given a target of generating revenue amounting to Rs 40,000 crore for the current financial year.

Despite COVID-19, the department is close to achieving this target. Till January 27, the department has earned revenue of more than Rs. 35,000 crore. There is still about two months left and he hoped that the given target will be achieved in these two months.

While praising the officers and employees of the departments, Deputy Chief Minister said that they have worked hard to achieve the goal. He also said that to generate more earn revenue, department officers should brainstorm on new measures to be taken for the same. He said that the government has started many new initiatives in the revenue department as well. Digital mapping of land assets is being done under the SVAMITVA Scheme across the state. This work has also been appreciated by the Prime Minister and it has been implemented in eight states of the country.

He said that for the convenience of the general public, the State Government has made several new changes in the revenue department. For instance, an online appointment facility has been introduced to get an appointment for the registration of land or plot.

Dushyant Chautala said that all the officers should work hard to take their state to the pinnacle of progress and try to give the best from their side. He also distributed post-training certificates to all the participants. Apart from this, the Deputy Chief Minister also released a souvenir based on the journey of training given to the trainee officers at HIPA Gurugram.

She said that Chief Minister,  Manohar Lal had given the responsibility of training newly appointed officers to HIPA Gurugram so that these officers could understand their responsibilities and duties and provide better services to the general public while working in the field. On this occasion Excise and Taxation Commissioner,  Shekhar Vidyarthi also shared his suggestions.