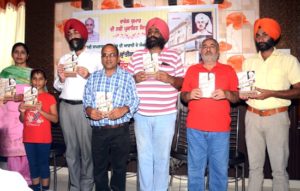 Ferozepur October 8, 2017: A book titled ‘Hide-out in Ferozepur of Bhagat Singh and his revolutionaries associate’ by Ramesh Kumar was released today over a simple and impressive ceremony at Bawa Diary in the presence of local prominent personalities.

Rakesh Kumar has already eight books to his credit on Railway Land Management, Shaheed Udha Singh, Gaddar Lehra and Shaeed Bhagat Singh and today is ninth book on ‘Hide-out in Ferozepur of Bhagat Singh and his revolutionaries’ associates’. Rakesh Kumar had also been honoured with various awards including three from Railway Minister and he is the highest awarded among the railway employees.  Even Baba Farid Society was conferred with Honest Award in 2011.

Sharing his research work, Rakesh Kumar said, Bhagat Singh and his associates had constituted a revolutionary party for the freedom of India with new techniques and new state arrangements. The activities of the revolutionaries were being held at the different hide-outs in the country including the one in Ferozepur at Toori Bazar earlier known as Shah Ganj where they staryed from August 10, 1928 to February 9, 1929.  This hide-out was off and on visited by Bhagat Singh, Sukhdev Singh, Chander Shekhar Azad, Shiv Verma, Vijay Kumar Sinha, Mahavir Singh and others revolutionaries.

Dr.Gya Parshad revolutionary used to live in the fictitious name of Dr.B.S.Nigam by taking on rent in the name of Lekh Raj.

Keeping in view the activities of the party, Bhagat Singh has cut his hair and beard here at Ferozepur.  The idea of this hide-out in Ferozepur was to provide the accommodation to the party members of the revolutionaries from outside the Punjab so that they could easily move by changing their out-look with different clothes etc., he added.

Rakesh Kumar said, 21 witnesses were produced in the court out of which 19 were from Ferozepur when the British government came to know about the activities of revolutionaries hide-out in Ferozepur.

Jai Gopal one of the witness in his statement said, he has seen the pistol No.168896 used for murder of Saundras by Bhagat Singh at the hide-out, he further added.

Rajinder Singh, State President, Punjab Students Union in his address said, the hide-out in Ferozepur is the sign of freedom movement from British rule.  The issue of the revolutionaries had always been to get power through freedom from Britishers.

Rakesh Kumar in reply to the query said, t.he government has declared the hide-out at protected monument and notices issued to tenants of the present occupants but after that there is no progress despite promises by various dignitaries visiting Ferozepur on different occasion.

He said, various youth organizations are campaigning to pursue with the government to immediately convert this hide-out into museum and library.