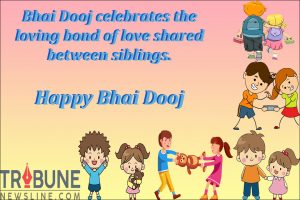 The fifth and the last day of the five-day-long Diwali festival is here, Bhai Dooj. This day celebrates the bond of brother and sister. It is celebrated by Hindus on the second lunar day of Shukla Paksha in the Vikram Samvat Hindu calendar or of Shalivahan Shaka calendar month of Kartika.

This festival is known by various names in various places. Some of them are:

There are few Hindu mythological based stories related to the origin of this auspicious day. According to the one legend, Lord Krishna visited his sister, Subhadra after killing demon Narkasur. Her sister gave a warm welcome to him and made the occasion really special through flowers and sweets. Subhadra also applied the ceremonial “tilak” on the forehead of her brother, Krishna and hence the festival of “Bhai Dooj” was born from there.

It is believed that on this special day, Yamraj, the God of death in Hinduism, visited his sister Yamuna. Yamuna had called Yamraj several times but he was unable to give her a visit. However, once Yamraj finally visited Yamuna, he was welcomed with a lot of love and respect. Yamuna also applied a tilak on his forehead. After receiving so much love, Yamraj asked Yamuna to ask for a boon. His sister asked Yamraj to mark a day every year where he will visit her. Thus, we celebrate Bhai Dooj to celebrate the bond between a brother and a sister.

The festival of Bhai Dooj has a literal meaning attached to it. It is made up of two words namely- “Bhai” meaning brother and “Dooj” meaning the second day after the new moon which is a day of its celebration.

The day holds the special significance into the lives of a brother and a sister. It is an auspicious occasion that celebrates the strong bonding between two siblings. Sisters invite their brothers to visit their place and prepare the beloved dishes for them. Sisters also pray to God for the well-being and longevity of their brothers against all the evils and bad fortune. In return, brothers follow their responsibilities of caring and loving their sisters.

On the day of the festival, sisters invite their brothers for a sumptuous meal often including their favourite dishes/sweets. The procedure may be different in Bihar and central India. The whole ceremony signifies the duty of a brother to protect his sister, as well as a sister’s blessings for her brother.

Carrying forward the ceremony in traditional style, sisters perform arti for their brother and apply a red tika on the brother’s forehead. This tika ceremony on the occasion of Bhai Bij signifies the sister’s sincerest prayers for the long and happy life of her brother and treat them with gifts. In return, elder brothers bless their sisters and may treat them also with gifts or cash.

As it is customary in Haryana, Maharashtra to celebrate the auspicious occasion of Bhau-beej, women who do not have a brother worship the moon god instead. They apply Mehendi on girls as their tradition.

The sister whose brother lives far away from her and cannot go to her house sends her sincerest prayers for the long and happy life of her brother through the moon god. She performs aarti for the moon. This is the reason why children of Hindu parents affectionately call the moon Chandamama (Chanda means moon and mama means mother’s brother).