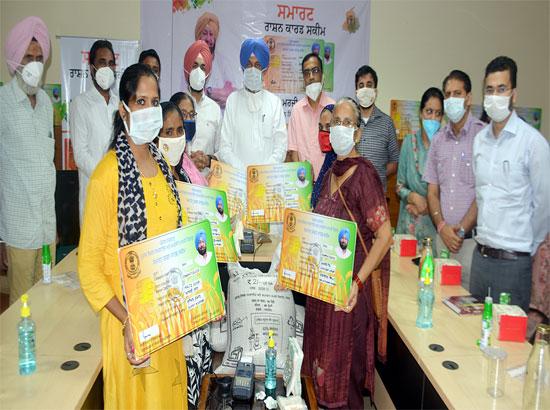 After handing over Smart Cards to the beneficiaries, Mr. Sidhu informed that over 4 lac persons from 1.10 lac families from SAS Nagar will benefit from the Smart Ration Cards. He said that Smart Ration Cards have ushered in an era of transparency in food grain distribution in the State. The bio-metric authentication ensures food grain distribution to actual beneficiary, purging the system of ghost beneficiaries. End-to-end computerization and digitization of the entire process makes minimizes the food grain pilferage and diversion. Above all , the Intra-State portability feature of card empowers the beneficiary to collect ration from the fair price shop of his choice. Consequently, it marks the end of age old monopoly of Depot Holder, said Balbir Sidhu.

The Minister said that Punjab government has always fulfilled the foodgrain requirement of the people. The Langars, the ration distribution and food grain distribution to the migrants and the needy during the lockdown speaks volumes about the efforts made in this direction. Incessant supply of food grains by Punjab is being made till date at National level to meet the challenge posed by novel corona virus outbreak.

While S. Balbir Singh Sidhu launched the scheme at the district level, simultaneous launch was also held at block level.

Pertinently, the Smart Ration Card can be used for withdrawing the food grains from the Fair Price Shops (FPS) through e-PoS machines without carrying any additional document. The Smart Ration Card will be swiped on the e-PoS machine to fetch the details of the family, after which the bio-metrics authentication of the family member will be done to withdraw the food grains.

The security features of Smart Ration Card are such said that the details of the beneficiaries integrated in the chip will be locked and which will be read from authenticated e-PoS machines only. The Cards have security features like the micro text technology which cannot be visible through naked eyes. The QR Code printed or the back side of the Cards is a combination of more than one fields.