Ferozepur, August 31, 2017 : (Tribune News Line Bureau):  A baby girl was found in ‘Panghura” – Cradle   – installed at Red Cross Office today morning around 9.30 am by two motorcycle borne with covered faces.  This is the first baby dropped in the cradle since 2013. 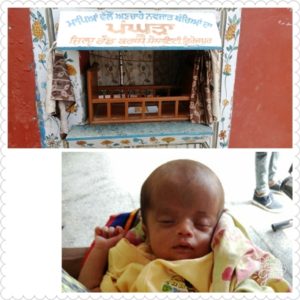 The moment the bell rang, the Prem Kumar, Sewadar of Red Cross rushed to the main gate and a child baby was found in the cradle dropped by the two persons with the covered faces on motorcycle and left.

Added here, the truth remains that women are still struggling in this part of the world for acceptance and survival right from the moment they are born. Disturbed by such recurring instances, all the Red Cross Societies in the State have installed Phangura – a forst care-cum-cradle for abandoned infants., outside their offices. The Red Cross Society also takes care of any health emergencies that these infants suffer from once taken under their care.

Ashok Behal, Secretary informed that with an aim to save infants from being left at odd places, the Phangura was introduced in 2013 in front of the Red Cross Society building and this is the first child dropped so far.

He further informed that an person can leave an infant in the cradle and ring the bell so that an attendant comes out to receive the child. The identity of the parents or the single mother is not asked and the new arrival is taken to the nearest hospital for a medical examination and provided required feed and medical aid.  Later the infant is sent to the licensed adoption agencies in the state from where the infant can be adopted.

In the instant case, the baby child was sent to the Sheel Sethi Child Hospital for medical checkup and  aid and after that the child will be deposited with the Child Adoption Centre for further taking care of the child and completing the formalities with regard to its adoption etc.  The adoption procedure too is done according to the norms that settle any doubts or concerns raised. Anyone who wants to adopt the child has to get clear notification from the Child Welfare Council and is investigated thoroughly by the court to come clear of all doubts, he added.

He said, cradle scheme is a life saver for India’s unwanted baby girls.

Behal informed that a formal intimation to the police has also been in this regard besides bringing it to the notice of Deputy Commissioner.