New Delhi August 5, 2020: A date that will be etched in the minds of all the people around the world. A day when the most awaited construction of the Ram Mandir started. The day when years of struggle and wait finally payed off. The day when everyone was glued to their television to watch the live telecast from Ayodhya. 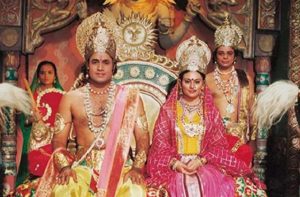 So, why is the day so important to us? The Hindu God Shri Ram, an incarnation of Lord Vishnu, was born in Ayodhya and since that day the place was also called Ram Janambhoomi. While, till the end of 14th century, the place was a pilgrimage site for the people but with the invasion of the Mughals and them acquiring all the places of the Hindus, it was seen that Mir Baqi (one of the Babur’s general) built the Babri Masjid or Babur’s Mosque in 1528 on Babur’s orders. Though Hindus from the start believed that the mosque was built after razing a Hindu temple, it was only in the 1850s when the dispute surfaced in a violent form. After years of struggle, on 9th  November 2019, the Chief Justice of India (CJI) Ranjan Gogoi’s understanding 5 judge bench gave the disputed land to Ram Lala in the judgment. The Supreme Court has gave alternative 5-acre land to the Muslim side to build the mosque.

Finally, after years of struggle, the day of Ram Mandir’s Bhoomi Pujan came. The morning of 5th August 2020 brought with it the holy air from heaven as if the Gods themselves are blessing the earth. A few days prior to the D- Day, people started decorating their houses and painted pictures of Lord Ram at various stages of his life, while on the eve of 5th August, people lighted diyas on the streets of Ayodhya from Naya Ghat and Ram ki Paidhi to Hanumangarhi. It was a site to behold. 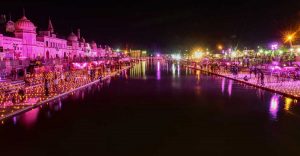 The day started early on 5th August, where people started preparing for the Puja since early morning. All the places that were going to be visited by the Prime Minister were being properly sanitised. Ahead of the Puja, CM Yogi Adityanath visited Ayodhya to check the preparations and assured that COVID-19 rules will be strictly followed. 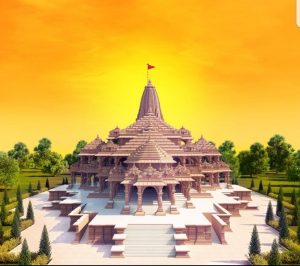 Prime Minister Narendra Modi travelled from Delhi to Lucknow in a private plane and was taken to Ayodhya in a chopper. At around 11:36am, PM arrived in Ayodhya and was welcomed by UP CM Yogi Adityanath from where they went to Hanumangarhi Temple. At the Hanumangarhi Temple, they offered their prayers and PM Modi was then presented a silver mukut or headgear and stole by Sri Gaddinsheen Premdas Maharaj, head priest of the Hanumangarhi Temple. PM also performed “Sashtang Pranam” at Ram Janambhoomi site. Prime Minister Narendra Modi planted a Parijat sapling, considered a divine plant, ahead of foundation stone-laying of Ram Temple in Ayodhya. 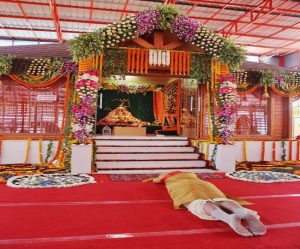 PM Narendra Modi, Uttar Pradesh Governor Anandiben Patel and RSS Chief Mohan Bhagwat, along with CM Yogi Adityanath and President of Ram Mandir Trust Nitya Gopal Das took part in ‘Bhoomi Pujan’ at Ram Janambhoomi site in Ayodhya. Priest at Ram Temple ‘Bhoomi Pujan’ said nine bricks, sent by devotees of Lord Rama from around the world in 1989, have been kept at the site. 100 out of 2.75 lakh with ‘Jai Shri Ram’ engraving have been taken. 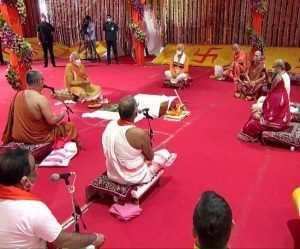 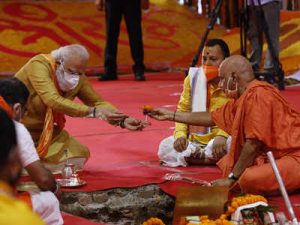 Under the leadership of PM Narendra Modi, the power of India’s democratic values and its judiciary has shown the world that how can matters be resolved peacefully, democratically and constitutionally, said UP CM Yogi Adityanath at Ram Temple event in Ayodhya.

RSS Chief Mohan Bhagwat at Ayodhya said: So many people had sacrificed, they couldn’t be here physically. There are some who couldn’t come here, Advani ji must be at his home watching this. There are some who should’ve come but couldn’t be invited because of the Covid-19 situation. There is a wave of joy in the whole country today. It is a pleasure to have centuries of fulfillment. The greatest joy is to make India self-reliant, the self-confidence of which there was a lack of self-realisation is being established today. We had taken a resolution. I remember the then RSS chief Balasaheb Deoras telling us that we’ll have to struggle for 20-30 years, only then will this be fulfilled. We struggled for 30 years and in the 30th year, we’ve attained the joy of fulfilling our resolution. Our country believes in ‘Vasudev Kutubhkam’, i.e. World is One Family. We believe in taking everyone along. Today is a new beginning of a new India.

I have been asked many times when will Ram Temple be constructed. Now, it will be constructed soon. The wishes of devotees will be fulfilled, said President of Ram Mandir Trust Nitya Gopal Das at Ayodhya. Prime Minister Narendra Modi unveiled the plaque of Ram Mandir in Ayodhya. President of Ram Mandir Trust Mahant Nitya Gopal Das, UP CM Yogi Adityanath, UP Governor Anandiben Patel and RSS Chief Mohan Bhagwat were also present with him. PM Narendra Modi also released a commemorative postage stamp on the ‘Shree Ram Janmabhoomi Mandir’ in Ayodhya.

Prime Minister Narendra Modi took the stage and urging the attendees to chant ‘Jai Siya Ram’, said, “This chant is not just echoing in Ayodhya but in the entire world. Jai Siya Ram – This call is resonating not only in the city of Lord Rama but throughout the world today. I express gratitude to all citizens of this nation, Indian diaspora across the world and all the devotees of Lord Rama on today’s pious occasion. Ram Janmabhoomi has got freedom today. Like August 15 is Independence Day for the country, today holds a similar significance for crores of those who devoted their lives for the cause of Ram temple. It is my good fortune that the Sri Ram Janmabhoomi Tirtha Kshetra Trust invited me, giving me an opportunity to witness this historic moment. I heartily thank the trust for this.” said Prime Minister Narendra Modi.

“A grand temple will now be built for our Ram Lalla who had been staying in a tent. Today Ram Janmabhoomi breaks free of the cycle of breaking and getting built again – that had been going on for centuries. After the construction of the grand Ram Temple, not only will the grandeur of Ayodhya increase but the entire economy of the region will also change. New opportunities will be created in every field, opportunities will also increase in every field in the region. People from all over the world will come here, the whole world will come to see Lord Rama and Mother Janaki. Ram Mandir will become the modern symbol of our traditions. It’ll become a symbol of our devotion, our national sentiment. This temple will also symbolise the power of collective resolution of crores of people. It will keep inspiring the future generations. It is my good fortune that I was invited to witness this historical moment.  With the construction of the grand Ram Temple, not only history is being made, but is being repeated. The way boatmen to tribal helped Lord Rama, the way children helped Lord Krishna lift Govardhan mountain, similarly, with everyone’s efforts of temple construction will be completed. Lord Rama made social harmony the cornerstone of his rule. He learned from Guru Vashistha, Motherhood from Shabari, Cooperation with Lord Hanuman and Vanvasi brothers, and gained trust from the subjects. He also gladly accepted the importance of a squirrel. Lord Rama resides inside the hearts of all of us. I believe that this grand Ram Temple to be built in Ayodhya, like the name of Lord Rama, will reflect the rich heritage of Indian culture. I believe it will inspire the entire humanity till eternity. We have to ensure that the message of Lord Rama and the Ram Temple, the message of our thousands of years of tradition reaches the whole world continuously. We’ll have to remember that whenever mankind believed in Lord Rama, progress took place. Whenever we deviated from path, doors to destruction opened. We’ll have to keep everyone’s sentiments in mind. We’ve to ensure everyone’s development with support and trust of all” said PM Narendra Modi at Ram Mandir Bhoomi Pujan ceremony in Ayodhya. 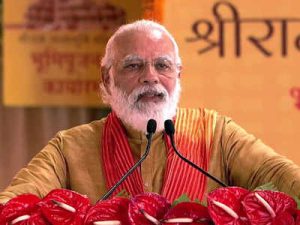 Apart from this, 1,11,000 besan ladoos were made in desi ghee and crystal sugar at Mani Ram Das Chhawni. These ladoos were then packed in steel cans and distributed in Ayodhya Dham and many pilgrimage areas. 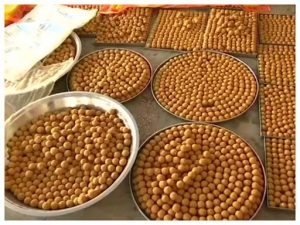 The day became even bigger when people from all across the world sent their good wishes for the puja, the best being the display of Ram Mandir digital billboard in New York’s Times Square. Mahendra Sapa, President (Washington DC chapter) of Vishwa Hindu Parishad of America and organiser of celebration in Washington DC celebrated Ram Mandir Bhoomi Pujan by hoisting a saffron coloured flag. 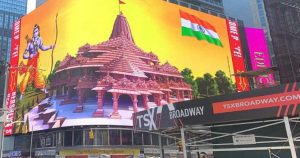 It is also being said that hadn’t it been corona, more than half the population of India would have reached Ayodhya to witness this puja. The people all around the country lighted diyas in their homes, ate sweets and celebrated in the little way they could. The scene was nothing less than Diwali celebration. And it should have been like that, after all, Lord Ram came back to his home after an exile of almost 500 years and this time the modern world became the witness of it. Finally, the triumph of good over the evil took place.