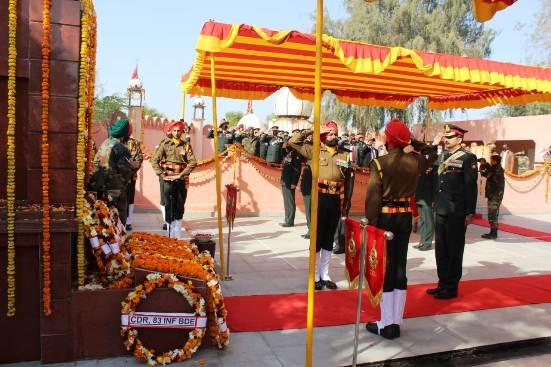 Fazilka, December 28, 2020:   The 49th Nagi Day was celebrated at Nagi War Memorial at Sadhuwali Cantonment – a small village located in Sri Karanpur close to International Boundary) in memory of gallant soldiers of the Indian Army who laid down their lives for the nation during the famous Battle of Nagi on 27-28 December 1971, in violation of the ceasefire.

A grand ceremony was held in Sadhuwali Cantt to commemorate the sacrifices made by these young men.

In the ensuing battle, a total of 21 Indian Soldiers including three officers who made the supreme sacrifice in the line of duty.  In this war, heroism was shown by the Indian Army in the Battle of Nagi with 51 Parachute Brigades, 4 Parachute Regiments, 9 Para Field Regiments and 410 Field Company and18 Cavalry Regiment to defeat the enemy.

During the ceremony, army personnel, veer naris, civil dignitaries and locals of Shikarpur were given a warm welcome followed by various programs at Nari War Memorial by Sudershan Chakkar Division, with participation from soldiers retired personnel, families enthusiastically and saluted in honor of their martyrs. Army Pipe Band, Khalsa Yudh Kala Gatka and Gorkha Khukri dance especially graced the occasion.