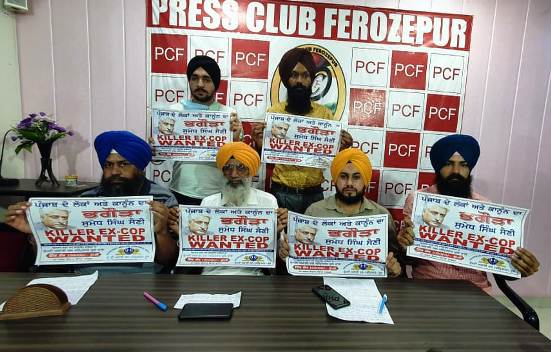 Ferozepur, September 11, 2020:  On Friday, Youth Shiromani Akali Dal (Amritsar) members of the Ferozepur Unit launched a search posters campaign against ex-DGP Sumedh Singh Saini, in the district and announced that similar posters would be put in across the state.

Tejinder Singh Thind said, Sumedh Singh Saini involved in a serious murder case of Balwant Singh Multani has been convicted and has been playing hide and seek game for the past few days to evade arrest.

The High Court had dismissed Saini’s petition and paved the way for the police to arrest.

Thind said, it is very unfortunate that a person with Z security is not traceable which put a question mark on the security itself.  It looks that Saini savior of the law, don’t have trust in the law and now avoiding his arrest.  The government should also clear its stand on this issue, he added.

Tejinder Singh Deol, Vice President, while the SGPC should come forward with a clear picture on the issue of sacrilege incidents and missing of Holy Books of Guru Granth Sahib and fresh elections may be held for selecting the new body.

G.S.Bhullar, President said, on September 14, the SGPC office will be gheraoed and strong decisions will be taken so that the real accused are brought under the ambit of the law.