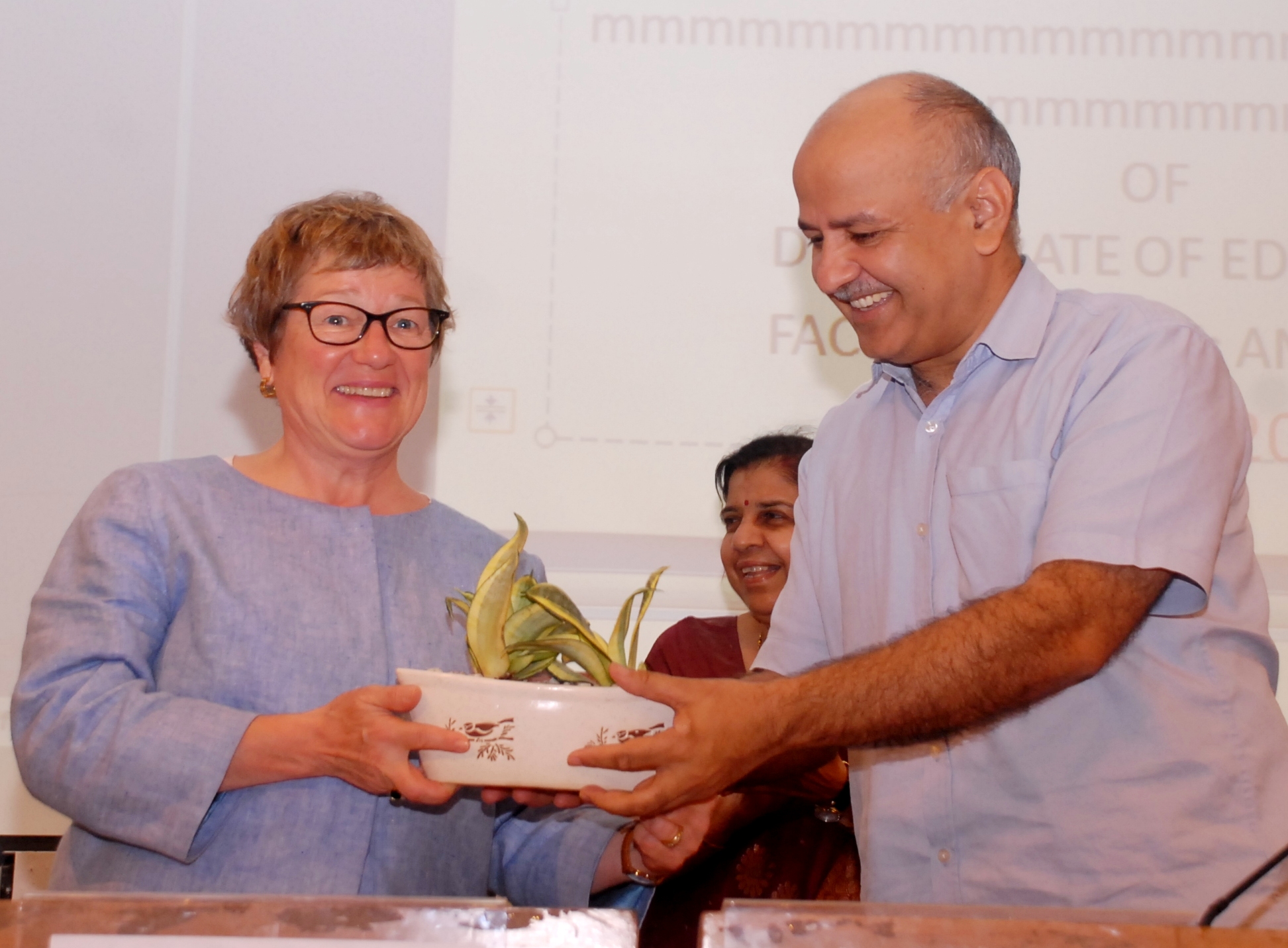 New Delhi, June 27, 2018, By SK. Vyas): A feedback session of the Heads of Schools and the teacher educators of Directorate of Education on their return from Finland after getting teacher training was held with Ambassador of Finland to India, Her Excellency Nina Vaskunlahti and Deputy Chief Minister Manish Sisodia today at Delhi Secretariat.  Both

Nina Vaskunlahti and Sh. Sisodia interacted with the Heads of Schools i.e. Principals, Vice Principals & teacher educators of Directorate of Education who finished their training programme.

In order to get an in-depth understanding about the Finnish Education Model in the context of school policies, teacher training and everyday teaching practice and school administration, two groups of 30 each comprising Heads of Schools and officers of DOE and Teacher Educators visited Finland w.e.f. March 4   andMarch 10 and 11 toMarch 17, 2018 to attend 5 days training program.

Manish Sisodia greeted the Heads of Schools & teacher educators on completion of their successful training and shared his experience of Finland visit and discussed the way forward.

Deputy Chief Minister also expressed his desire to incorporate the good practices observed and asked all the participants to give a write up in the form of a paper, to be compiled in the form of a document which can be used as a reference for educators who have not visited which was highly appreciated.

The Ambassador, Finland was of the opinion that it was a beautiful experience to have people across nations to interact with each other and also that these learning can be taken forward in the form of exchange program and through ICT.

She was of the opinion that even in Sub-Zero temperatures the learning of students was not deterred due to the well thought of education system in which they had invested after independence. While describing the Finnish system of Education as a model to the rest of the world she expressed her desire to gain feedback so that the training can be improved and the relationship can be strengthened with India.

Various learning and takeaways were shown and discussed by the participants. They discussed the inculcation of a sense of independence amongst the children till the age of Six so that they are prepared for schooling. Also, the learning during the school time is reflected in the citizens even after they graduate and take up professional roles. After which an open house discussion was initiated as to the inputs and the way forward.

This was succeeded by the presentations by the participants who shred different observations and practices. The most striking observations are as follows:

—  Teachers’ Handbook with Solutions was a key feature.

—  Parental Engagement and Home –School relationship is also the key strengths of their Primary Education.

—  Role of Head of school is to facilitate, support and also ensure to depute teachers in in-service training programs as per the need by the teachers.

—  STEM to STEAM-Science Technology Engineering and Mathematics to adding ART in the curriculum to make it joyful and skill based.

—   Soft Skills, Role Play, Self Rating were the other areas that were discussed during the workshop focusing on Teaching and Working together.

—  Teacher autonomy in the selection of textbooks, methods, students participation.