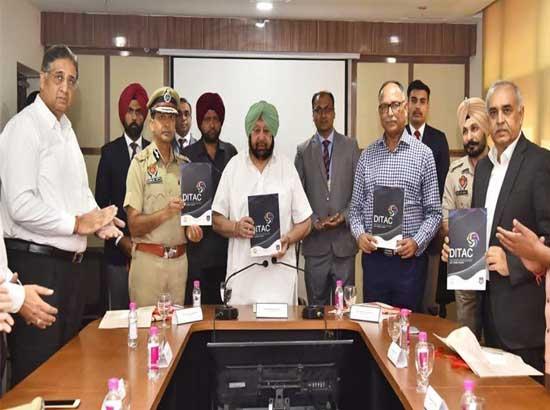 Underlining the criticality of the unit, the fourth such establishment in the country, to the augmentation of the state’s cyber threat intelligence network, the Chief Minister said the new emerging cyber threats had necessitated the enhancement of online technical intelligence systems. The other three such units exist in Gurugram, Guwahati and Uttarakhand.

Stressing on the importance of a robust intelligence gathering apparatus, especially for a border state like Punjab which shares 553 KM border with a hostile neighbour, Captain Amarinder pointed out that the state’s geographical location made it extremely vulnerable to infiltration and smuggling of narcotics. With cyber crime emerging as a graver unconventional threat, it was vital to reinvent and relook techniques all the time to ensure the safety and security of the people online, he asserted.

The facility, set up at the State Cyber Crime Cell as a collaborative venture between of the Punjab Police and National Technical Research Organisation (NTRO), would help scale up the state’s operational preparedness in the field of cyber forensics, social media analytics and cryptology, said the Chief Minister. The national body was set up in 2004 on the recommendations of the committee set up after the Kargil intrusion, he pointed out.

Captain Amarinder noted that the unit would help the law enforcement agencies to further develop expertise in effectively countering anti-social elements in cyber space, beside extending quality training to police personnel in the field of strategic cyber crime monitoring.

Expressing concern over the increasing use of technology in criminal activities, the Chief Minister underlined the need to make continuous investments in the development of techniques to utilise digital evidence for legal purposes, thus ensuring that investigations in cases of online crime and frauds are taken to their logical conclusion.

Digital forensic investigations conducted in a time bound manner could nail the culprits and bring online frauds under check, he added.

The Chief Minister, who went around the facility, lauded the efforts of the State Chief Information Commissioner Suresh Arora and the incumbent state police chief Dinkar Gupta in ensuring that the building was completed in record time in collaboration with the NTRO. It was under the tenure of Arora, as state Police chief, that the idea to set up the facility was conceptualized.

The Chief Minister also interacted with the police personnel in the Advance Forensic Lab and appreciated their skills in analysing the online data to nab criminals. He asked the DGP to ensure that the officers are facilitated in keeping abreast with the latest developments in the cyber crime domain.

On the occasion, the Chief Minister released a booklet prepared by Punjab Police as a guidance to the facility’s objective and functioning.

Speaking on the occasion, NTRO Chairman Satish Chandra Jha complemented the Chief Minister for his proactive role in getting the facility operationalised at the earliest. Intelligence was the difference between any terrorist attack and its prevention, he said, adding that training of personnel would further fortify the state government’s efforts to counter terror and online crimes.

Bureau of Investigations Director Prabodh Kumar described the unit as the merger of the state’s efforts in cyber forensics and development of anti-cyber crime infrastructure.