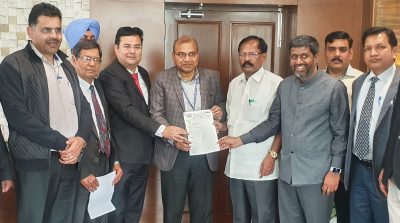 Mohali–All India Council for Technical Education (AICTE), New Delhi organized a workshop to deliberate on the Approval Process Handbook 2020-21. Around 500 stakeholders of various Technical Institutions of the Country attended the workshop.

AICTE introduces major changes in the APH including ban on new technical institutions for 2 years, closure of 2nd or part time shifts thereby making all courses full time regular, merging of the existing Technical institutions running under the same Trust/Society at different places, reducing the duration of MCA Course from 3 years to 2 years etc. Moreover, AICTE will not permit any institution to run both MBA and PGDM course simultaneously under same institution from coming session. The delegation further urged AICTE to give relaxation in various other norms.

Reacting on the new norms, General Secretary, FSFTI, Sh. KVK Rao urged AICTE to permit the unaccredited Technical institutions to appoint faculty in the ratio 1:20 on the admitted intake due to reduction of 50% admissions in past years.

While reacting on the clause of APH to get accreditation in 60% of the courses in next 3 years,  Shridhar Singh (Rajasthan) said that such ultimatum to the colleges would encourage them to adopt illegal means.

President, PUCA, Dr. Anshu Kataria said that because of the delay in release of scholarships from Centre and State Governments for more than 3 years and variable fee structure in the technical institutions it is very tough to pay the salaries in time to the faculty by many institutions via nationalized banks as per 7th pay commission as prescribed by AICTE.