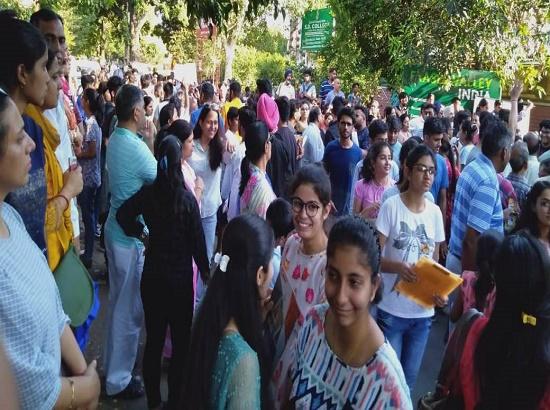 Chandigarh, May26, 2019: Around 60,000 candidates from all over the Country appeared in Common Law Admission Test (CLAT) today all across the Country. The exam is being conducted by National Law University Odisha, Cuttack (NLUO) for the admission in 21 National Universities of Law in India.

Sidhu added that Aryans College of Law is the only College in Punjab which has now become part of those top Universities and Colleges of Legal Studies to use CLAT Score for the admissions in LL.B (3 Years) and BA-LL.B (5 Years), B.Com-LL.B (5 Years) program from 2019-20 academic year. keeping in view the interest of students in legal studies, Aryans has also launched scholarship & Counseling helpline Numbers for law aspirants. Students who are willing to pursue LL.B, BA-LL.B & B.Com-LL.B under scholarship can Call on 98765-99888 or 98762-99888 or register on Aryans website www.aryans.edu.in

Sidhu further added that in North India, Chandigarh has become the destination for the students of Punjab, Himachal Pradesh, Haryana, J&K etc. He further said that near Chandigarh Periphery over 5000-6000 students applied for CLAT exam.

It is to be mentioned that special measures were taken at the exam centers wherein electronic gadgets including Mobile Phones, calculators, etc were not allowed inside the exam hall. Students were asked to bring their ID proof along with the roll numbers.