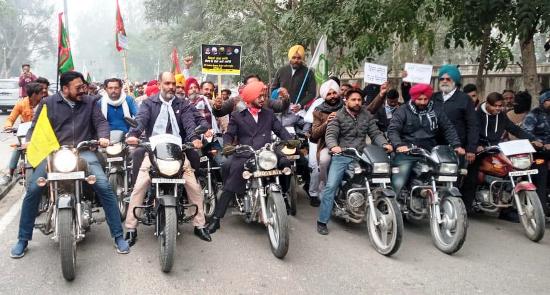 It is pertinent to mention that the talks between farmer leaders and Union ministers have turned out to be futile so far despite having as many as 10 rounds of talks.  Even the proposal to hold the farm laws for a period of 1.5 years has also been rejected as nothing less than the rollback of 3-Farm Laws is acceptable to the farmers.

The Motorcycle Rally started from historical gurudwara Saragarhi passed through the main roads and markets of the city, and culminated back at the same place, carrying party flags and placards with slogans – We stand with the farmers – Fight for the rights of Punjab – Take back the Black Laws and No Farmer, No Feed.

Bhupinder Kaur said, this is not just the farmer’s fight but the fight for all countrymen. India is an agricultural country and if farmers are unhappy then the country is affected.

Extending full support to the farmers, who are camping at Delhi borders for the last two months, in their fight against the Modi government, AAP workers –  Iqbal Singh Dhillon, Secretary, Sarabjit Kaur, Treasurer, Harjider Singh Ghanga, Even Incharge, Bakshish Singh Sandhu, Medial Incharge, Nirvair Singh Sindhi , Gurbhej Mann, Office Incharge –  appealed to the people to join the Tractor Parade by the farmers on January 26, in good number, to show the strength of unity with the farmers, pressurizing the Centre government for repealing the three Black Farm Laws.