Ferozepur, July 7, 2020: A symbolic protest was held today outside the DC office demanding restoration of all Blue Cards and pension which had been deleted with one or the other reasons.
Later, Aam Aadmi Party leaders submitted a memorandum in the name of Chief Minister, Punjab Capt Amarinder Singh, to the Deputy Commissioner, Ferozepur.
Speaking to media persons, Advocate Rajnish Dhaiya, Halqa Incahrge and General Secretary SC Wing Punjab and District President, Ranbir Singh Bhullar said, thousands of Blue Cards have been deleted of the families economically weak, making them difficult to run the household affairs. They said, thousands of beneficiaries were dependent on Blue Card and pension and they have been left at their own mercy because of anti-people policies. The issue was also raised in the House by the Opposition leader Harpal Singh Cheema but to date, no satisfactory action has been taken by the government and CBI as well. They said, as per the commitment of the government, the beneficiaries are waiting for a pension of Rs.2500 per month. 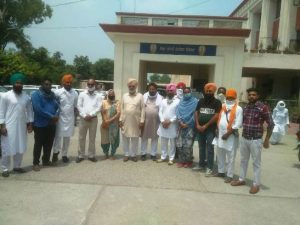 We however suspect the intentions of the Congress government which had denied the poor their due earlier also and will demand from the government to ensure that there is no discrimination in the distribution of foodgrains under the ‘Aaata-Daal’ scheme”.
We strongly condemn the deletion of names Blue Card holders and in case the same is not restored, a massive protest by SC Wing of AAP will be organized in the State, they added.