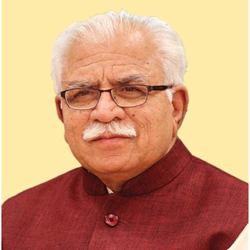 Chandigarh, February 1, 2021: While hailing the Union Budget-2021 presented by the Union Finance Minister Nirmala Sitharaman today as a visionary, pro-poor and forward-looking budget, the Haryana Chief Minister,  Manohar Lal said that special focus on farming, healthcare, infrastructure, women and senior citizens would in particular help further improve the lives of people of Haryana.

In a statement issued today, Manohar Lal congratulated Sitharaman for presenting the Budget amidst unprecedented circumstances and said that it would give a massive boost to the economy and further strengthen the ‘Sankalp of Aatmanirbhar Bharat’.

The Chief Minister also thanked Nirmala Sitharaman for her announcement to extend the Swamitva Scheme to all States and Union Territories in the country.  He said that Haryana is the pioneer State to start a scheme to make the villages of the State free from Lal Dora so as to give the villagers the right to own their property, purchase and sell land and take loans on it. This scheme is being appreciated throughout the country and at present, it is being run in eight states under the name of “Pradhan Mantri Swamitva Yojana”, he added.

He said that the significant budgetary allocations and announcements for farmers, the healthcare sector, affordable housing, and the extension of the Ujjawala scheme will have great synergies with the ongoing and planned efforts of the state government in these important areas.

He also hailed the significant increase in allocation to the healthcare sector saying that it would lift the general well-being in the economy. He said that the allocation is likely to be around Rs 2,23,846 crore, a rise of 137 percent from the previous budget. He also highlighted the extension of tax exemption schemes in Affordable Housing and said that it could provide a good multiplier effect on the GDP. He said that exemption of senior citizens above 75 years of age and who have income only from pension and interest income from income tax filing is a welcome decision.

Manohar Lal also praised  Nirmala Sitharaman for the announcement of Minimum wages to all categories of workers, allowing women to work in all categories and also in night shifts with adequate safety. He also thanked the Union Finance Minister for several other significant announcements in the education sector including setting of Higher Education Commission, the provision of Rs 50,000 crore for the National Research Foundation, setting up 750 Eklavya model residential schools and up-gradation of 15,000 government schools which would expand the reach and improve quality.

Haryana Chief Minister, Sh. Manohar Lal has extended greetings to all the employees associated with the nursing sector on the occasion of International Nursing Day.