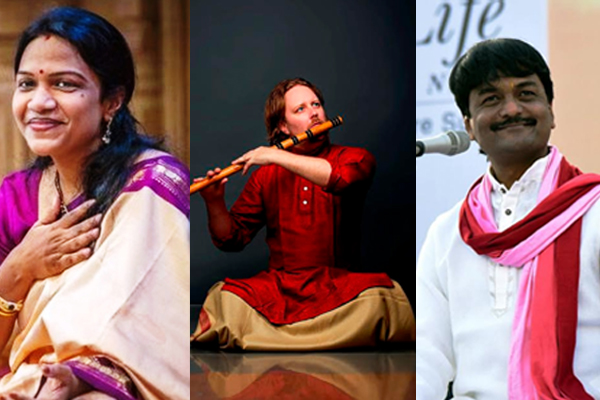 This event of a soulful evening of music hopes to explore and unravel the layers and beauty of rich and traditional ragas of Hindustani Classical music.

A fine exponent of the Gwalior style, Shashwati’s musical dexterity marks a refined eclecticism that has lent her an individualistic style at a fairly young age. Born into a family devoted to music, Shashwati showed rare sensitivity towards it from early childhood. She is Grand-daughter of the late Pt. Balabhau Umdekar, the erudite exponent of the Gwalior style of classical Hindustani music.

She studied under the tutelage of her mother Kamal Mandal before receiving a scholarship to learn from Balasaheb Poonchwale, and has also delved into the Gwalior gharana’s ancestry by studying Dhrupad with the Gundecha Brothers. She is considered to be one of the finest exponents of tappa – a semi-classical style derived from Punjabi camel-riders.

Nash Naubert an American citizen has been living in India for the last 20 years is a masterful performing artist whose devotions and lifelong pursuits to classical music began under the tutelage of India’s living legend maestro Pt. Hariprasad Chaurasia. This eminent distinction of being taught by one of India’s greatest maestros is Nash’s source of inspiration and determination as he transforms breath into the soothing and introspective music that flows through the flute.

He has performed in some of India’s top festivals alongside great artists like Begum Parveen Sultana, Pt. Anindo Chatterjee, Pt. Vishwa Mohan Bhatt, Ustad. Amjad Ali Khan to name a few. Nash’s company ‘Music of Now’ is focused on promoting Indian classical music world-wide and its first concert was held at the Carnegie Hall New York and Benaroya Hall. He was chosen for Ted Talks in Mumbai, speaking about his musical journey and was awarded the Musicians Federation of India Award 2019 for excellence in Indian Classical Music.

Jayateerth Mevundi Initially groomed under the guidance of Late Shri Arjunsa Nakod and Late Shri. Shripati Padegar of Kirana Gharana, He today ranks top amongst the young brigade of Hindustani music. Jayateerth has regaled innumerable music lovers spread across the globe by his power-packed performances comprising different genres of Indian Music, ranging from Classical to Semiclassical to Devotional Music. He is among the well-known Hindustani classical vocalists belonging to the Kirana Gharana today.

“Music forms an intrinsic part of Indian culture and traditions. Through programs like this, we aim to bring the Indian audience closer to the richness of India’s musical legacy” stated Mandar Karnik, the founder of Atharva Creations.