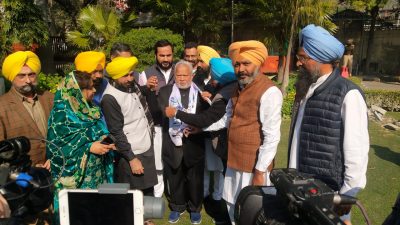 New Delhi / Chandigarh, February 3, 2020:  The ruling Congress party in Punjab suffered a severe setback on Monday when a senior leader of the Congress Party and former MLA from Nabha, Ramesh Singla, joined the Aam Aadmi Party (AAP) in the presence of senior leadership.

Welcoming Ramesh Singla into the party fold amid heavy media presence, Bhagwant Mann said that Singla played his political innings in various capacities spanning over decades and did not succumb to any political pulls and pressures of the Congress brass when it came to probity and propriety. Mann said in his tongue-in-cheek style that keeping oneself above board in a corruption-ridden Congress dispensation was indeed a milestone by itself.

Bhagwant Mann said that Ramesh Singla always put the interests of the people and the state first, saying that he fought a grim battle during the dark days of terrorism in the state and that the people of Punjab, especially from Nabha-Patiala area, remember his insignificant role in dousing the seething flames of terrorism, adding that by his joining the AAP  held greater significance as it would prove to be a great moral strength for the party cadres and dedicated workers of the party at large. The AAP leader added that a tall leader like Ramesh Singla quitting the ruling Congress party had left nothing to speculate that leaders with the clean images were being ignored while sycophants were being promoted to meet their petty political ends. Bhagwant Mann and Harpal Singh Cheema said that Ramesh Singla’s rich political experience would be utilized to strengthen the party to the fullest.

Speaking on the occasion, Ramesh Singla said that while Capt Amarinder Singh government had disappointed every section of the society in Punjab by reneging on the promises it made to the people, on the other hand, the Arvind Kejriwal government in Delhi had won the peoples’ hearts by pushing an unprecedented growth through its honest and hard work, which was why people of the national capital were singing paeans in favor of the Kejriwal government.

Singla added that he decided to join the AAP on the basis of the Kejriwal government’s performance in Delhi and Bhagwant Mann’s performance in Parliament broaching issues and concerns of the people of the state.

Singla recalled his long association with the Punjab Congress Party. He served as the state unit president and as general secretary of the party for 20 long years, saying the Congress party was knee-deep into corruption and that the people of the country needed a secular, forward-looking party like the Aam Aadmi Party and not the likes of Congress and the BJP which were playing divisive politics, he said.