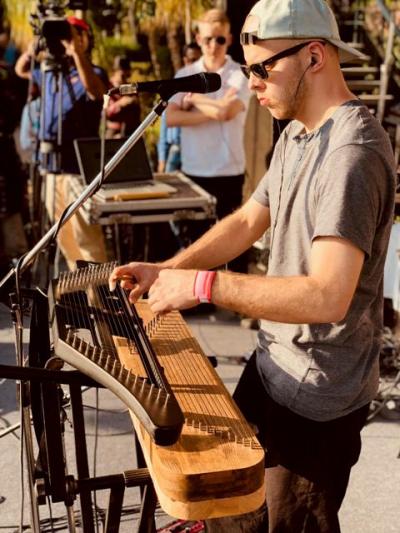 Kasauli, March 31, 2018  ( By TNL  Bureau) : A musical rollercoaster of pop, rock, Indian classical, Bollywood hits and more, a euphoric extravaganza of dance, music, friends and fun, and a gratifying experience of contributing to a noble cause—the 7th edition of Genesis Foundation’s Kasauli Rhythm & Blues Festival delivered on all counts.

#KRBF2018 or #KasauliRnB, which features in the list of some of the most-anticipated music festivals of India, is a confluence of artists, music-lovers and supporters of Genesis Foundation’s cause. Proceeds from the Festival go into the treatment of critically ill under-privileged children with heart disorders. Supporting the Foundation on this journey are supporters like Monster.com, MakeMyTrip, Sennheiser all of whom have contributed to making this effort successful.

On the second day, as the sun cut through the mountain breeze, Nikita from Naach with Nikki lead people swaying to the tunes with a dance workshop, leaving them rejuvenated and ready for the day. In the afternoon, it was time for a dance—a dance of sticks on Nagaras led by the renowned Nathulal Solanki.

The evening’s performances began with Kamakshi Khanna Collective, who brought the smoky blues to #KasauliRnB. Following her was Neeraj Arya’s Kabir Collective, a band whose lyrics are inspired by the verses of the famous poet, Kabir. As the sun set, Jonita Gandhi performed to some of the latest Bollywood numbers that left the crowd roaring for more. Everyone was up and dancing and singing along. And then, the grand dame of Indian rock and roll took the stage. Usha Uthup, whose powerful and resounding voice has made people of all ages fall in love with her music, had the audience wishing the night would never end as she sang song after song that was familiar and well-loved.

The spectacular Saturday evening began with a special performance by GigVeda, a band chosen by Superhits 93.5 RED FM who performed on latest Bollywood numbers. Their energetic performance was followed by AuroraSonic who came all the way from Finland. Anttu & Johannes, from AuroraSonic, mesmerized the crowd and played new instruments that are based on kantele, the national instrument of Finland. And then came the lively performance by When Chai Met Toast, who played infectiously happy music keeping the audience on their feet with their original tracks like Scooby-Doo and Fireflies. Next up was Parvaaz, who captivated the audience with their original numbers that traverse folk, blues and psychedelia, wrapped in an ambient sound that is familiar yet elusive. Headlining on Saturday was Rabbi Shergill, who left the audience breathless with his high-octane performance. Along with his known Bollywood hits such as Challa, Bulla Ki Jana he also sang Tu Hai Khubsoorat, a song specially dedicated to the children supported by Genesis Foundation. The song was about all the little things that people find beautiful in life.

Talking about the event, Prema Sagar, Founding Trustee of Genesis Foundation said, “We are delighted at the turnout and the performance this year. Kasauli Rhythm & Blues Festival has become a force to reckon with and we are happy and grateful for the relentless support that we receive each year. It is heartening to see that even though people come here to enjoy, they want to contribute to our cause wholeheartedly. I’d like to thank everyone who was able to make this Festival such a success. We hope to see you in the coming years as well.”

The final day saw the Army Band’s performance and a delectable brunch served at the Kasauli Club, ending the weekend on a memorable note.

The Festival, organized by Genesis Foundation (GF), has a big group of supporters, all coming together to make it a success and to contribute to the cause.

“We are happy to support Genesis Foundation’s efforts towards a generous cause. The foundation has conducted many successful fundraisers over the years and has displayed perseverance and hard work in looking after the underprivileged. Through this association, we get an opportunity to serve the underprivileged, who are fighting illness and require medical aid.” said Saujanaya Shrivastav GCMO, MMT

We are very happy to be associated with Genesis Foundation for the noble cause of saving little hearts. As we enter our 2nd year of partnership with the Foundation in their noble initiatives, we continue to pledge our support towards spreading the hope of life amongst the young children. As the leader in the audio industry, the Kasauli Rhythm and Blues Festival is an ideal platform for us to spread the word and drive others to contribute towards this great cause! We are glad that music lovers at the Kasauli Rhythm and Blues Festival loved the performance of our Sennheiser Top 50 winners- ‘Parvaaz’ and ‘When Chai Met Toast’. Going ahead as well, we will support Genesis Foundation and give a beating heart a chance to beat stronger and longer #savelittlehearts” said Saahil Kumar, Head Marketing, Sennheiser India.