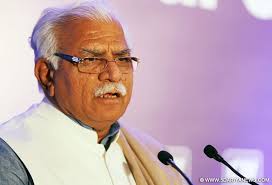 Chandigarh, Feb 18, 2019 –The Haryana Chief Minister, Manohar Lal, has saluted the bravery of the officer and three soldiers of 55-Rashtriya Rifles, who attained martyrdom while taking on the terrorists during a cordon and search operation at Pulwama in Srinagar, today.

In a condolence message issued here, the Chief Minister paid condolences to the bereaved families and said the entire country salutes the spirit with which the soldiers are fighting the terrorists.

Expressing condolences on the martyrdom of Sepoy Hari Singh of village Rajgarh in district Rewari, Mr Manohar Lal said soldiers from Haryana have always made supreme sacrifices for the country. The cremation of martyr Hari Singh will be held at his native village Rajgarh on February 19.

Martyr Hari Singh was born on August 15, 1993 and was recruited in 55-Rashtriya Rifles in 2011. His father Agadi Singh also served in the Army. The other members of the family of Hari Singh include mother Pista Devi, wife Radha Bai, and one-year-old boy Lakshya. Hari Singh had three sisters.

Haryana Chief Minister, Sh. Manohar Lal has extended greetings to all the employees associated with the nursing sector on the occasion of International Nursing Day.