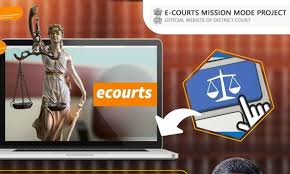 2927 Court complexes across the country have been connected by a
high-speed Wide Area Network (WAN).
Chandigarh, Dec 11, 2020:  Under e-Courts Project, as many as 2927 Court complexes
across India have been connected so far by a high-speed Wide Area
Network (WAN), thus achieving 97.86 percent of courts of 2992 has been
connected with WAN.
It is stated that the Department of Justice (DoJ) along with
BSNL has been working relentlessly on connecting the remaining sites.
Under the e-Courts Project, one of the largest digital networks of the
the world was conceived by the Department of Justice along with the
e-Committee of the Supreme Court of India to connect the 2992 court
complexes located all over India by a high-speed Wide Area Network
(WAN) via different modes of connectivity such as Optical Fiber Cable
(OFC), Radio Frequency (RF), Very Small Aperture Terminal (VSAT) etc.
In May 2018 the mandate of providing Managed MPLS VPN services to all
these sites were entrusted to the BSNL, which has pan Indian presence
with the latest state-of-the-art technology and high-end telecom
infrastructure and transmission equipment. The BSNL also has presence
at all corners of India, including the NE region, J&K, Uttarakhand, A&N
Islands, etc.
Many courts under the e-Courts project are located in far
flung areas where the terrestrial cable cannot be used for providing
connectivity. Such areas are termed as Technically Not Feasible (TNF)
and in DoJ’sendeavor to bridge the digital divide; connectivity is
being established at TNF sites using alternative means like RF, VSAT
etc.  With persistent deliberations, meetings and coordination with
different stakeholders including BSNL and the Courts, the Department
has been able to reduce the total TNF sites from 58 in 2019 to 14 in
2020, thus leading to the saving of public money as the cost of providing
connectivity through alternative means like VSAT is much higher.
Department of Justice has also decided to use the newly inaugurated
submarine (undersea) cable for providing connectivity to 5 TNF sites
in Andaman and Nicobar Islands.
In the COVID-19 pandemic scenario importance of
connectivity becomes greater as suddenly courts are under huge
pressure for the on-line hearing of cases. The DoJ has therefore
constituted a high powered committee with representatives from the
BSNL, NIC, e-Committee, etc to review the bandwidth requirement in the
changed scenario. The Department of Justice, along with the
e-Committee of the Supreme Court of India has taken a major leap
towards digital transformation and its success in leveraging digital
technologies for transforming the Judiciary and providing access to
justice to ordinary citizens is being appreciated at all levels.
As part of the National e-Governance Plan, the e-Courts Project is
an Integrated Mission Mode Project under implementation since 2007 for
the ICT development of the Indian Judiciary based on the ‘National
Policy and Action Plan for Implementation of Information and
Communication Technology in Indian Judiciary’.
The Government approved the computerization of 14,249
district & subordinate Courts under the e-Courts Phase I project (
2007-2015).  The objective of the e-Courts project is to provide
designated services to litigants, lawyers and the judiciary by
universal computerization of district and subordinate courts in the
country by leveraging Information and Communication Technology (ICT)
for improved justice delivery. Envisaging further ICT enhancement
through universal computerization of all the courts, Phase II of
the project was approved by the Cabinet in July 2015 with a cost of Rs
1670 crore under which 16,845 courts have been computerized.
By YS.Rana: Principal Correspondent.