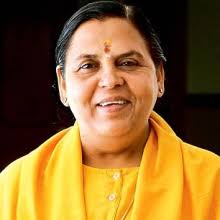 Karnal May 1, 2018:, April 30—The Union Cabinet Minister for Drinking Water and Sanitation, Ms Uma Bharti, has said that a solution has been found for the plastic and polythene waste; it can now be utilized for the construction of roads.

Stating this while interacting with media persons in Karnal after the launch of Central Government’s GOBARdhan Yojana nationally from Haryana, on Sunday,  Uma Bharti said the scheme focused on managing and converting cattle dung and solid waste from farms and fields to useful compost, biogas and bio-CNG.

Bio-gas plants from cattle dung will be set up at individual or community level and also at the level of Self Help Groups (SHGs) and NGOs like Gaushalas. This will help in keeping the villages clean and generate energy while increasing the income of farmers and cattle herders. It will encourage the farmers to start looking at dung and other waste not just as waste but as a source of income.

She expressed the confidence that as Haryana had done best in the Bachao–Beti Padhao campaign it would also prove to be the foremost in the implementation of the GOBARdhan Yojana.

In response to queries in respect to the falling groundwater in some areas of Haryana and Punjab, she said some of these areas had come under the Dark Zone and we hope that Haryana would work to emerge out of the dark strengthen itself up to come out of it.