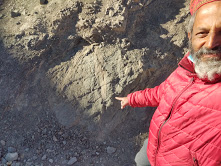 CHANDIGARH—20 million old large fossils of Palm leaves measuring more than four feet in length have been discovered from the Tethyan sediments of Ladakh, claimed by Dr. Ritesh Arya, an internationally renowned Geologist from Kasauli in Himachal Pradesh.

While dwelling on his research, Dr. Arya said that Tethys sea was once separating India and Tibet in geological history till 20 million years ago and as a result of it the Himalayas were not born. The presence of fossils of palm from the sediments of Indus Mollase in Ladakh clearly shows that Ladakh Himalayas were once below the sea and the sediments from where the palm fossils were found till there the Mountains were below the sea, states he.

The presence of palm fossils represents a near-coastal environment. The gigantic size of actual specimens shows that the conditions at the time of deposition would have been hot and humid more confirming to equatorial climatic conditions, says Dr Arya and added that these types of flora were nowhere find in the modern-day Himalayas.

Fossils of palm leaves have been found in Kasauli Himachal by Medlicott in 1864 which were named as Sabal major by O Fiestmantel.

Fossils of palm have been discovered by Ritesh Arya from Kasauli in his  PhD  Thesis.

The fragile nature of the sediments make the recovery of the specimen very difficult  Insitu preservation of the specimen and declaring it as a Geoherotage site can help in its preservation. This can help attract tourists and educate the locals and tourists to know about the rich fossil and rock heritage the Ladakh Himalayas processes.

Paleo latitudinal position of the  Indus molasses part of Ladakh was near the equator. This is also substantiated by these fossils which are confined to Indonesia Malaysia and Andaman Nicobar Island.

So on the basis of these palm and other leaf fossils, it can be concluded that Kasauli and Ladakh were deposited in near-coastal environment probably near the equator

Kasauli sediments on basis of Charophytes have been dated to be 20 million years. So the Ladakh sediments from where these palms are found are also 20 million years. This also means that the basin of Kasauli and Ladakh were homotaxial and deposited in the same time. Finding fossil is rare but procuring and preserving it is an even greater challenge. Many great fossils are lost because they are mishandled at the time of extraction or preservation.

The fossil site was discovered when Dr. Ritesh was searching specimens for his 1st school museum of its kind in Ladakh. Through which he intends to educate children about mother earth.